BAGHDAD, Iraq (CNN) -- An Iraqi panel that oversees the activities of former Baathists is denouncing the arrest of one of its senior members by the U.S. military, which says the man is an Iranian-backed Shiite militant involved in a bombing that killed four Americans. 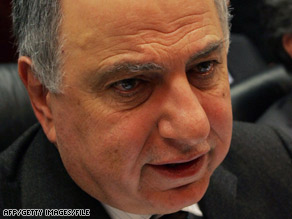 Ahmed Chalabi is condemning the arrest of a member of a de-Baathification committee.

The man taken into custody is Ali al-Lami, the de-Baathification committee's director general for follow-up and execution, according to Ahmed Chalabi, the head of the committee.

Chalabi said al-Lami was detained at Baghdad International Airport by coalition forces, with the help of a foreign security company, after returning from Beirut, Lebanon.

"We deeply condemn this act against one of the committee's most senior officials and one who has had a major role in the committee's work," said a statement issued Thursday by Chalabi, who demanded the man's release and an apology to his family.

"This act by coalition forces again reaffirms the necessity of finding a solution for random arrests of Iraqis carried out by American forces."

The U.S. military confirmed an arrest at the Baghdad International Airport on Wednesday, but it wouldn't confirm the identity of the man, saying it is Multi-National Forces-Iraq policy not to release the names of those detained.

Troops suspect the man of working "within the highest echelons of the Special Groups," the name the U.S. military uses for Shiite militants.

Intelligence sources have implicated the man in "multiple criminal acts including bombings and attacks against Iraqi targets -- specifically the June 24 bombing at the Sadr City District Advisory Council meeting in which six Iraqis, two U.S. civilians and two U.S. soldiers were killed," the military said.

"The man has been known to travel in and out of Iraq to neighboring nations including Iran and Lebanon, where it is believed he meets and helps run the Iranian-backed Special Groups in Iraq," the statement from the military said.

"In order to maintain the safety and security of the passengers and patrons of the airport, coalition forces waited for the wanted man's plane to land, and in cooperation with airport authorities, detained the man without incident."

The military said the detained individual will be charged and given due process.

The Baathist Party ruled Iraq during the reign of Saddam Hussein, and de-Baathification has been a sensitive issue since the former Iraqi leader was toppled.

The government wants to keep out former high-level Baathists from serving in important posts, but also doesn't want to alienate Sunni Arabs.

The Shiite- and Kurdish-dominated government wants to oversee and control the role that the former Baathists -- many of whom were Sunnis -- play in government.

Chalabi is the one-time Iraqi exile who worked to influence the U.S. policy that led to the invasion of Iraq.

Meanwhile, the U.S. military in Baghdad on Thursday reported the deaths of two soldiers.

One was killed in eastern Baghdad "when terrorists attacked a patrol" with a roadside bomb, the military said.

Another died of wounds suffered in a small-arms attack on Wednesday during a foot patrol in northern Baghdad.

Both soldiers were from Multi-National Division-Baghdad, the military said.

The number of U.S. troop deaths in Iraq for August stands at 22. The number of troops killed since the start of the Iraqi war is 4,150.

In other incidents on Thursday: