BAGHDAD, Iraq (CNN) -- Lebanon's prime minister paid a visit to Iraq on Wednesday -- the first such visit by a Lebanese leader in the post-Saddam Hussein era -- and he and his Iraqi counterpart discussed issues including oil exports and investment. 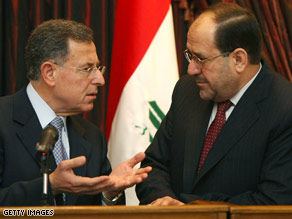 Prime Minister Fouad Siniora and a delegation were greeted at Baghdad International Airport by Nuri al-Maliki, Iraq's prime minister, the government said in a news release.

After the two met, they spoke to reporters.

Al-Maliki said Iraq welcomed Lebanese investors and will work to provide them the proper economic incentives.

"Iraq will supply Lebanon with crude oil according to a bilateral agreement that will be signed by the related ministers from the two countries," al-Maliki said.

Siniora's visit follows last week's visit by Jordan's King Abdullah II, which was the first trip to Iraq by an Arab leader in the post-Saddam era. Iraq has been working to develop closer relations with Arab nations.

Lebanon named an ambassador to Iraq two years ago, but he died, and a replacement has not yet been chosen. There is an Iraqi Embassy in Beirut, the capital of Lebanon.

In other news Wednesday: