(CNN) -- Syrian commanders say their troops along the border with Iraq are making strides in nabbing militants intent on staging suicide attacks in Baghdad. 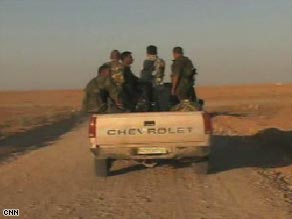 Syrian soldiers in a pickup truck patrol the area of their country's border with Iraq.

But, the commanders say, they could do a better job if they were able to obtain modern equipment denied to them because of sanctions and if they received cooperation from the U.S. military.

The commanders also say U.S. aircraft occasionally violate Syria's airspace, a situation that points to the lack of coordination between the countries.

"We work within our abilities," said Gen. Khaklil Al-Khaled, a provincial military commander in northeastern Syria. "The border constitutes a daily obsession to us, to prevent infiltration and confront the contraband groups and jihadist groups that infiltrate the border."

Watch what life is like on the Syrian border »

Syrian commanders were interviewed by CNN along the border, where Syria and the United States have a complicated relationship.

The Syrian government "began limited cooperation with the United States in the global war against terrorism" after the September 11, 2001, attacks, the U.S. State Department has said.

The United States has long criticized Syria for being a staging ground for insurgents who infiltrate Iraq in the Euphrates River valley of Anbar province and conduct attacks in the towns along that waterway and in Baghdad.

It has also criticized Syria for its ties to Iran, the Lebanese militant group Hezbollah, and the Palestinian movement Hamas.

Syria says it is doing what it can to thwart insurgent activity and the United States in turn has softened its negative rhetoric toward President Bashar Al-Assad's regime. They say they've arrested many foreign fighters and have confiscated many weapons.

The number of monthly insurgent strikes in Iraq has dropped dramatically recently as Iraqis who once backed insurgents in Anbar province have turned against them. Still, some insurgent activity continues in Anbar and along the Nineveh province section of the Iraqi-Syrian border.

Al-Khaled said Syrian troop outposts are strung along the vast, sandy 385-mile Syria-Iraq border, with 12 soldiers per post. The troops have erected a sand wall and embark on daily foot and vehicle patrols.

"There have been many arrests of jihadi groups that infiltrate the Iraqi side, and they have been turned to the authorities. These jihadi groups belong to different nationalities, such as Egyptians, Saudis, Moroccans, Tunisians, and Libyans that fight in Iraq," Al-Khaled said.

The Syrians chafe at criticism from Americans for not doing a better job. The Syrians say they are using antiquated equipment because sanctions by the United States prevent them from upgrading.

They say they lack night surveillance equipment, automatic weapons and other items they believe would help them.

Al-Khaled said Syria doesn't like the U.S. administration casting blame on Syria for lax border security when "America itself cannot control its border with Mexico."

The Syrian military said it has no communication with U.S. commanders along the border -- something that troubles Syrian commanders. Al-Khaled said communication would help deal with problems such as U.S. planes entering Syrian airspace.

"Every now and then there are airspace violations -- sometimes not less than five to six times per month with their military jets and helicopters," Al-Khaled said.

He said Syria lodges its complaints with an Iraqi liaison officer. Americans say the errors are tactical or human, he said, but he doubts those assertions because of the U.S. military's acumen and resources.

"This is an issue that concerns both sides," he said. "There should not be any lenience from their part in violating the border of a free, sovereign state."

Mohammed Askari, spokesman for Iraq's Defense Ministry, declined to comment, saying these are Multi-National Forces issues. The U.S. military has not responded to a request for comment.