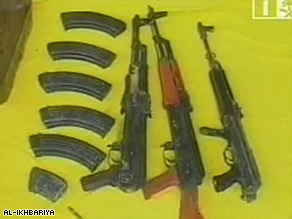 Saudi Interior Ministry spokesman Gen. Mansour al-Turki said that 701 were initially arrested but only 520 are still in custody. The remaining 181 were released for lack of evidence.

Nevertheless, it is the largest number of arrests of terrorism suspects announced by Saudi authorities.

In a written statement, the ministry said the cell's leader was found with a letter from al Qaeda's second in command, Ayman al-Zawahiri, "urging him to raise funds and that [al-Zawahiri] will provide him with the personnel, whom they called the mujahedeen."

The mujahedeen, the ministry said, are really "deviant spoilers" who it said would be "arriving from Iraq, Afghanistan and North Africa to target the oil installations and to fight the security forces."

"They had already begun planning to target oil installations and other security locations with car bombs," it said.

Al-Turki said that some of those arrested are believed to have recruited and trained militants from Asia in order to bring them to Saudi Arabia to carry out terrorist attacks, al-Turki said.

During the arrests, the ministry said, Saudi security forces seized a variety of weapons, ammunition, money and documents disclosing financial support for terrorist activities. It said the terror cell was "taking advantage of the leniency granted to the pilgrims and the visitors to the Holy Mosque and the holy places."

It said it announced the arrests "to inform its citizens and its residents of the true aspirations of the heads of sedition and corruption and that all what they want is to disturb the peace and security and spread chaos in this country."

The announcement is a reminder that al Qaeda in Saudi Arabia remains a real threat, despite the successes that Saudi authorities have had since their campaign against the group began in 2003, CNN terrorism analyst Peter Bergen said.

It is also a reminder that since 2004, al Qaeda chief Osama bin Laden has made it al Qaeda's policy to attack the oil industry in Saudi Arabia, which has the largest oil reserves in the world.

The arrests come at a sensitive time, as oil prices reach an all-time high and the Saudis have been hosting an international conference seeking to mitigate those prices.

A successful attack on a Saudi oil facility would be likely to send oil prices even higher.

The arrests are reminiscent of a similar round-up announced in November of more than 200 Saudi and foreign militants. Those arrests, Saudi authorities said, involved six terrorist cells that were plotting to attack an oil support facility, to assassinate clerics and security forces and to smuggle weapons into the country.

Those arrests took place in the previous months but were kept secret so as not to jeopardize ongoing investigations, al-Turki said at the time.

Christoph Wilcke, a senior researcher on Saudi Arabia for Human Rights Watch, said some of those arrested in anti-terror sweeps have had little or no ties to terrorist groups.

"I have been in touch with the families of those who have been detained," Wilcke said. "One woman said, 'My husband is a nurse; he brought this wanted terrorist to a hospital, and they arrested him, too.'

"Another said, 'my son went to a neighbor's house to say hello or borrow a knife,' and a month later, they found out he was on the wanted list.

"I don't know if these are innocent stories, but we should have an open and fair trial to find out," Wilcke said.

Those picked up as terrorist suspects have no legal rights and are sometimes never heard from again, he said.

"Effectively, Saudi Arabia operates its own Guantanamo," he said. "Saudi security services operate a string of prisons where these kind of people go in, along with your ordinary dissident, and nobody will ever hear from them again."

Saudi Arabia does not have written criminal law to deal with terrorism offenses, he said.

"They're not tried. ... They can't petition a court," Wilcke said. "Their best bet of coming out is to go through a religious re-education program. ... The Saudis like this [program], but we're more skeptical.

"Telling a detainee that he's all wrong about religion can't take the place of any judicial hearing."

All About Al Qaeda • Saudi Arabia