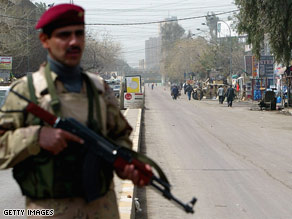 An Iraqi solider stands guard in Karrada neighborhood on February 26, 2008, in Baghdad, Iraq.

A roadside bomb exploded first, around 7 p.m., in the central Baghdad district of Karrada, killing and wounding a number of people, the Interior Ministry official said.

As others gathered to help the wounded, a suicide bomber amid the crowd detonated an explosive vest, killing and wounding many more, the official said.

The majority of causalities occurred during the second attack, the official said.

The U.S. military said Iraqi Security Forces and emergency responders were first on the scene, and coalition forces arrived afterward.

The U.S. military did not provide a death toll in its statement on the attacks.

"This terrorist attack was a senseless act of violence directed against the Iraqi people," Col. Allen Batschelet, chief of staff of the Multi-National Division, said in a written statement.

The explosions occurred during a busy time as Thursday night is the beginning of the weekend for Muslims.

Meanwhile, the office of Iraq's president announced he will go to Turkey on Friday for a two-day visit that comes amid hostilities between Turkish troops and Kurdish militants in northern Iraq.

President Jalal Talabani's office told CNN that he is heading to the Turkish capital of Ankara for an official, previously scheduled working visit. He will be accompanied by a high-level delegation, including a number of Cabinet ministers.

The Turkish military for months has been conducting cross-border airstrikes and firing artillery into northern Iraq against members of the Kurdistan Workers' Party, or PKK, militants who have launched attacks against Turkey from bases in northern Iraq.

The PKK has spent two decades fighting for autonomy for Kurds in southeastern Turkey. Turks regard the PKK militants as terrorists and point to indiscriminate PKK attacks against civilians as well as police and military targets over the years.

The Iraqi government opposes the PKK presence in its country, but it views the Turkish military incursions as a violation of its sovereignty.

They discussed "its importance as a factor to address outstanding issues and strengthen bilateral relations between Iraq and Turkey in all fields," the office said.

The border conflict has wider implications for the Middle East and Asia, with the United States concerned that prolonged cross-border fighting could destabilize the region, where Kurdish separatists pose challenges to power in Iran and Syria, as well as Turkey and Iraq.

The United States and the European Union also label the PKK a terrorist organization. U.S. officials have shared intelligence with Turkey.

A local leader in Sons of Iraq -- the name of the Iraqi militia or grass-roots group helping the U.S. and Iraqi militaries -- provided intelligence that led troops Wednesday to the facility, located 20 miles south of Baghdad, the military said in a news release.

An American troop commander, was quoted as saying the local leader "wants to clean up the area" since "AQI killed half his family."

Soldiers found "a house full of materials used by insurgents for torture."

Early Thursday in Baghdad, coalition troops targeting "an Iranian-backed Special Groups militia" arrested four people, the U.S. military said in a news release. Special Groups is the term used by the military for hard-line Shiite militants who have been ignoring the Shiite cleric Muqtada al-Sadr's call for a cease-fire.

The military also reported a Sunday raid by the Tal Afar Special Weapons and Tactics team in western Nineveh province on Sunday. The team, advised by U.S. Special Forces, killed "nine criminals and detained eight suspects during an operation to disrupt an al Qaeda in Iraq cell." E-mail to a friend

All About Iraq • Turkey • Kurdish Politics • Al Qaeda in Iraq