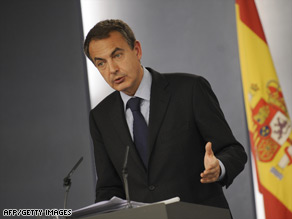 The blast occurred in the city of Bilbao around 11 a.m. (5 a.m. ET). The warning came an hour ahead of the bombing and gave police enough time to evacuate the area, including some 500 people working at the government-run Basque regional TV, known by its initials EiTB, and in other nearby offices.

There were no immediate reports of casualties, but the blast shattered the glass facade of the TV station's new headquarters.

It was the first major attack blamed on ETA since police arrested two of its suspected top leaders recently.

ETA is blamed for more than 800 deaths in its long fight for Basque independence and is listed as a terrorist group by the European Union and the United States.

Last month during an anti-terrorism raid in France, authorities captured the man then considered to be the overall chief of the Basque separatist group.

Authorities said the suspect, Mikel Garikoitz Aspiazu, 35, alias "Txeroki," was in charge of both ETA's military and political, or policymaking, wings.

After that, Spanish Prime Minister Jose Luis Rodriguez Zapatero said ETA was more "isolated" than ever and he ruled out fresh talks with them.

"The end of ETA can be seen only with the push from the rule of law," Zapatero said in an interview on December 18 with CNN affiliate Cuatro TV.

He said police had arrested 365 ETA suspects in the past two years, notably the two recent suspected top ETA leaders and their alleged ETA chief predecessor, who was detained last May, also in France.

On Wednesday after the Bilbao blast, Zapatero told an audience in southern Spain that "ETA can attack but it is going to lose all the battles."

Top Spanish officials have repeatedly warned that ETA is not yet finished. An ETA communique during the autumn threatened many targets, including government-run media outlets.

The previous major car bomb blamed on ETA was on October 30 at the University of Navarra in Pamplona, which injured 27 people and caused extensive damage.

There are about 600 ETA convicts or suspects in Spanish jails and 150 others in French jails, authorities in the two countries have told CNN.