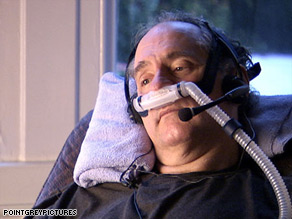 Craig Ewert dictates a letter to his children before leaving for his assisted suicide in Switzerland.

The film follows retired university professor Craig Ewert during the last four days of his life in 2006, when he visited a Swiss clinic with his wife, Mary, in order to die.

The 59-year-old suffered from motor neurone disease (MND), which deprived him of the use of his arms and legs and caused him to be on a ventilator, Mary Ewert told The Independent.

MND destroys the body's motor nerves, eventually resulting in paralysis. Most sufferers die within five years of diagnosis although scientist Stephen Hawking has survived with the disease for more than 40 years.

"Right to Die: The Suicide Tourist" shows Ewert lying in a rented Zurich apartment, where an employee of the clinic prepares a lethal dose of drugs for Ewert to drink. As the camera rolls, and with his wife by his side, Craig Ewert then closes his eyes and dies.

Mary Ewert said her husband wanted his death to be filmed in order to show that a terminal illness does not have to result in a painful death.

"For Craig, my husband, allowing the cameras to film his last moments in Zurich was about facing the end of life honestly," she told The Independent.

Watch more about the case »

"He was keen to have it shown because when death is hidden and private, people don't face their fears about it. They don't acknowledge that it is going to happen, they don't reflect on it, they don't want to face it. That's the taboo." What's your view? Click here to comment

Ewert was an American who lived in North Yorkshire, England with his wife. In a clip on the Web site of British satellite channel Sky Real Lives, which planned to air the documentary, he dictates an e-mail to his son and daughter in America.

"I truly expect that death is the end, that there is no everlasting soul, no afterlife," Ewert says. "This is a journey that we all must make at some time. I would hope that this is not a cause of major distress to those who love me and I expect that my dear sweet wife will have the greatest loss, as we have been together for 37 years in the deepest intimacy." Read explainer about assisted suicide

The scheduled airing of the documentary provoked controversy in Britain. It was featured on the front pages of several newspapers, with the Daily Mirror asking in bold letters, "Is this an insight into the issue of euthanasia or just a cynical attempt to boost ratings?"

The production company behind the film says it explores the difficult choices made by patients and families of those who commit assisted suicide.

"'The Suicide Tourist will take the audience on a journey they could only have imagined, and will not forget," Point Grey Pictures says on its Web site.

Oscar-winning Canadian filmmaker John Zaritsky made the documentary with the family's permission and gained rare access to the Dignitas clinic in Zurich, where Ewert died.

Mary Ewert told The Independent that she was "very happy" with how the film turned out.

Opponents of assisted suicide said, however, the film was cheap voyeurism.

"I think it's reducing somebody's death to a kind of reality show, a peep show. I think it's very cheap," said Phyllis Bowman, executive director of Right to Life.

Bowman said she feared the film would encourage the idea of assisted suicide. That was echoed by Care Not Killing, an alliance of human rights, disability rights, and health care groups.

"The disproportionate media coverage given to a very small handful of persistent people, desperate to end their lives, creates the false impression that there is a growing demand for assisted dying," Care Not Killing said in a statement on its Web site.

The group said more attention should be paid to palliative care for dying people, rather than assisted dying.

It is against the law in the United Kingdom to help someone commit suicide, and it can bring a prison sentence of as long as 14 years. Recent court cases have sought clarity on the law, however, saying it does not specify at what point assistance begins.

Swiss law says only that helping someone commit suicide must not be for personal gain.