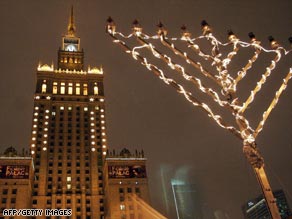 A giant Menorah in front of Warsaw's Palace of Culture during a ceremony for the Jewish holiday of Hanukkah.

The Nazis went on to murder over six million Jews during the Holocaust -- half of them Polish -- and bequeathed a legacy of fear in Poland that was reinforced by postwar violence and persecution led by the communist regime that took power.

The once-flourishing Jewish communities in cities such as Warsaw and Krakow virtually disappeared, as synagogues and Jewish-owned businesses were destroyed. The residents were rounded up and imprisoned in sealed ghettos before being transported to Nazi death camps such as Auschwitz and Treblinka.

The situation in post-war Poland remained bleak for Poland's Jewish survivors, with many forced underground or abroad. According to Jewish cultural association, Beit Warszawa, almost 200,000 people chose to emigrate to the United States, South America and the newly-formed State of Israel after 1945.

Those who remained once again encountered anti-Semitism of terrible fury and brutality. A 1946 pogrom in the southeastern town of Kielce was followed by a state-sponsored witch hunt in 1968 that reduced Poland's registered Jewish population to less than 10,000.

The disappearance of Poland's Jewish population destroyed much of the country's cultural fabric, with the food, music, dance, literature, theater, painting and architecture of Jewish life also lost.

In 1989, Poland liberated itself from communism, due to the underground activism of the Solidarity movement, in which many Polish Jews took leading roles. Survivors who were Polish citizens before the war were allowed to renew their citizenship, while religious institutions were revived.

However with relatively few Jews left in Poland, religious and cultural traditions were revived through the activities of Jewish groups from the United States, such as the Lauder Foundation and the Taube Foundation for Jewish Life & Culture.

These groups continue to play a leading role in supporting all aspects of Jewish life in Poland, from the internationally known Krakow Jewish Culture Festival, to the construction of the Museum of the History of Polish Jews in Warsaw.

Jewish schools and summer camps are open again, and synagogues are being rebuilt for worship and as cultural centers. Many Poles, brought up as Catholics, have discovered they are really Jewish or have Jewish roots and are trying to reconnect to that culture.

It is clear the growing interest in the country's rich Jewish past among young Poles means it will not be forgotten. There are an estimated 25,000 people with Jewish ancestry in Poland, according to monthly magazine Midrasz.

Krakow's old Jewish quarter of Kazimierz survived the war and now it is the spiritual home of the country's Jewish revival. Jewish-style restaurants sit alongside synagogues, while the Galicia Jewish Museum hosts music concerts, film shows and even Hebrew and Yiddish classes. Most of the language students are Poles, according to the museum.

In 2005, the Jewish festival of Hanukkah was celebrated in the center of Warsaw by lighting a three-meter tall menorah, a nine-branch Jewish candlestick. The ceremony was a visible symbol of the changes in Polish-Jewish relations in recent years, Michael Schudrich, Poland's chief Rabbi and an American, told reporters at the time.

There remains much to be done to ensure that Poland's 800-year-old Jewish community survives -- In 1939 there was an estimated 3.5 million Jews living in Poland, compared to around 50,000 in 2008 -- but the fact that it survives at all reflects the progress the country has made since 1989.

All About Poland • Warsaw • Nazi Party