BERLIN, Germany (CNN) -- German federal police seized two suspected terrorists from a Dutch passenger aircraft at Cologne airport Friday shortly before it was due to take off for Amsterdam, officials told CNN. 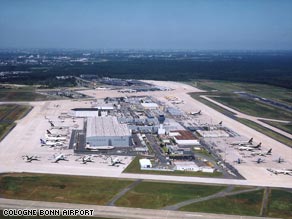 The arrests were made at Cologne's airport.

A 23-year-old Somali national and a 24-year-old German citizen who had been born in Mogadishu were arrested on a KLM plane at 6.55 am local time (0455 GMT), a police spokesman said.

Police said "farewell" letters had been found from the men that led them to suspect they were intending to carry out terror attacks. It was not revealed where the letters were found or how long the men had been under observation.

Walter Roemer, press spokesman at Cologne-Bonn airport, said that the arrests had been "very unspectacular". He said federal police boarded the plane and arrested the two suspects, "without them showing any resistance."

The two had been among 40 passengers en route to Amsterdam. All those on board were asked to disembark while the suspects' luggage was identified. The plane took off for Amsterdam after a delay of one hour and 20 minutes.

She said everyone was then forced to leave the plane, and there was a "baggage parade" to see whose bags belonged to whom.

Watch more details on the incident. »

Amsterdam's Schipol airport Web site listed flight KL 1804, the scheduled morning flight from Cologne to Amsterdam, as having arrived at 9.17 am local time, one hour and two minutes after it was due to arrive.

In September 2007, German authorities arrested three suspected militants planning what were described as "massive" attacks on American targets in Germany.

German media said at the time that potential targets could have included Ramstein Air Base, the U.S. military's main installation in Germany, or the major international hub of Frankfurt Airport.

"This was a long term operation, there was a couple of individuals that the German intelligence agency was monitoring," he said.

"The feeling was that they had come back specifically with the purpose of planning and plotting a terrorist attack."

CNN's Diana Magnay in Berlin contributed to this report