(CNN) -- A car bomb exploded on a busy shopping street in the Northern Ireland town of Omagh 10 years ago Friday -- the single deadliest attack in the 30-year conflict between Roman Catholics and Protestants. 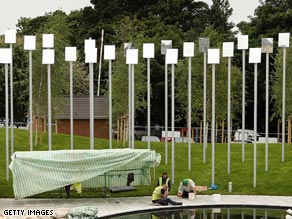 A memorial has been built for the 29 people killed and 300 injured in the Omagh bombing.

The blast killed 29 people, including a woman pregnant with twins, and wounded more than 300.

It occurred at the tail-end of the bloody period known as the Troubles, which lasted from the late 1960s to late 1990s. It was also four months after the signing of the Good Friday peace accord -- which ushered in a new era in the region despite the continuation of some fighting.

The 500-pound bomb struck on a busy summer Saturday when people were out shopping on the main street in the market town.

The attackers called in a bomb threat but gave police the wrong location for the bomb, leading authorities to evacuate people from the center of town to the end of the street, right where the bomb went off.

Local authorities plan a 45-minute service Friday with prayers and singing to commemorate the anniversary. They plan a moment of silence at 3:10 p.m. (10:10 a.m. ET), the time the bomb exploded on August 15, 1998.

"All I can remember is going up. I went up and I came down and I hit something very, very hard," says Doreen Preston, who lost her right leg and two fingers of her right hand in the bombing.

"A soldier told me I hit the footpath. But as far as I was concerned, I thought I hit a telegraph pole 'cause all I could see was sparks and [the] smell of rubber."

Preston was working at Watterson's, a drapery and linen shop on the high street along with her best friend, Veda Short. They had worked together at the shop for 26 years, along with friends Geraldine Breslin and Anne McCombe.

As police evacuated people from the area, the women were herded along with others to the spot where the bomb went off. Preston was the only one of the women to survive.

"I looked down and I could see Anne's skirt, and I thought, 'Oh, poor Anne's been injured, too,'" Preston said. "I thought, 'Where's the rest of the girls?' And they weren't -- I couldn't see anybody."

Preston spent more than four months in the hospital, at times so close to death that she planned the hymns for her own funeral, Preston said. She described anguish at learning her friends were killed.

"I miss them terribly," Preston said. "Veda was like a sister to me."

The Real IRA, a dissident republican paramilitary group, claimed responsibility for the bombing. The Real IRA opposed the peace plan, which had the cooperation of the mainstream IRA, or Irish Republican Army.

Only one man, Colm Murphy, was ever convicted in the bombing, but his conviction for plotting the attack was overturned and a retrial is pending.

A second man, Sean Hoey, was brought to trial, but a judge ruled last December there was not enough evidence to convict him.

Families of the victims have said they are angry that so many people who must have had a part in the bombing -- from the scouts and plotters to the bombmakers -- are still free.

Watch a survivor tell her story »

"I think there is a lot more information," said Michael Gallagher, whose 19-year-old son Aiden was killed in the bombing. "I think the intelligence services have not fully cooperated with the investigation."

Survivors have waged their own fight to get over the physical and emotional scars from that day.

"That's quite true, 'cause it's [been] proved. 'Cause all those people round me were all taken and I was saved. But in saying that, it was a hard fight, a very hard fight."