(CNN) -- Russian troops advanced out of two breakaway Georgian regions on Monday as the outnumbered and underequipped troops from the former Soviet republic retreated to defend the capital of Tbilisi. 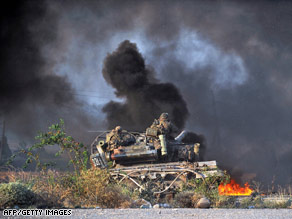 Georgian soldiers on a tank watch a Russian attack on a convoy outside Gori on Monday.

If Russia brings its full military might to bear on its former satellite state, the Georgian military could find itself overcome quickly.

Jane's Information Group, the British-based defense publications and military intelligence company, shows the Georgian military would be trying to hold off a force more than 20 times its size.

Russia has about 641,000 in its armed forces, 320,000 of whom are in the army -- most of them conscripts who traditionally fare poorly against a motivated opponent, according to Jane's. Low morale, poor management, inefficiency and inflexibility are cited as problems by Jane's.

About 26,000 are in the Georgian military, and about 17,000 of them are in the army, which has had the benefit of four years of training by the U.S. Marines, Army and Special Forces, according to Jane's. Georgia has been trying to form a professional military force and by the end of next year expected to have only a small number of conscripts in its main force, Jane's said.

Those forces would be using almost all Soviet-era weaponry. The Tbilisi government has been seeking western armaments but has been told by Washington that forces must be able to use the old weapons proficiently before they get new ones, Jane's reported.

Even with those old weapons, Georgia doesn't have much to work with.

Its best tanks are Soviet-era T-72s, of which it has about 80, according to Jane's. The Georgian army has about 150 armored personnel carriers and infantry fighting vehicles and a similar number of artillery pieces.

The sharp end of the Georgian air force consists of seven aging Su-25 ground attack fighters and seven attack helicopters, according to Jane's.

It has about 7,000 tanks, 7,000 infantry fighting vehicles and armored personnel carriers and thousands of pieces of artillery, Jane's reports.

In the air, Russia can bring 650 multirole or ground attack aircraft to the battle, as well as 500 attack helicopters. Georgia has 150 surface-to-air missiles to use in the fight, according to Jane's.

Of course, Russia's military is spread across a country of 10.58 million square miles (17 million square kilometers), 243 times the size of Georgia. It is not known how many or which of its forces are fighting in Georgia.

All About Republic of Georgia • Russia