BAGHDAD, Iraq (CNN) -- British Prime Minister Gordon Brown said Saturday that plans are being made to scale back troops in Iraq, but he would not set an "artificial timetable." 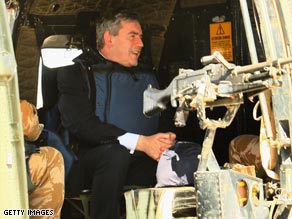 According to the Associated Press, Brown's comments -- made during an unannounced visit to the Iraqi capital to hold talks with counterpart Nuri al-Maliki -- come in advance of next week's scheduled address to British lawmakers on Iraq, when he is expected to give more details on troop reduction plans.

Britain has about 4,000 troops in Iraq, based around the southern city of Basra. British troops handed over security control to Iraqis late last year, but still maintain a presence in Basra province.

According to AP, Brown said "enormous progress" had been made to lower violence and begin economic reconstruction around Iraq. "There has been a very big turnaround," he added.

Both leaders stressed the importance of building long-term relations between Iraq and Britain, the future of the British presence in Iraq and economic issues, the Iraqi government confirmed.

Other attendees of that meeting included the deputy president of the Kurdistan Regional Government, Kosart Rassoul, and other Kurdish officials.

"Talabani briefed Brown and the accompanying delegation on the political, security and economic developments Iraq has witnessed over the recent months which spread security and stability across the country," the presidential statement said.

They discussed issues concerning both countries "in a way that strengthens relations between Iraq and the United Kingdom in the upcoming period," according to the statement.

During the discussion, the British prime minister cited what he called, "positive political developments achieved recently," which he attributed to a drop in violence, the statement said.

Limiting militia and outlaw activity in Basra, Mosul and other areas contributed as well, he said.

Violence has decreased recently in Iraq, and there have been improvements in the performance of the Iraqi security forces.

Brown also paid particular attention to economic cooperation between Britain and Iraq, the statement said, specifically what role his country and British companies would play in the reconstruction and rebuilding of Iraq.

Talabani emphasized the importance of national harmony, and pointed to the return of the Accord Front -- the country's Iraq's largest Sunni Arab bloc -- rejoining the Cabinet on Saturday.

The bloc -- which includes 44 lawmakers in the 275-member parliament -- pulled six ministers from the Cabinet last August for several reasons, including the monopolization of power by Shiites and Kurds and what had been regarded as the unjust detention of Sunni Arabs.

The Accord Front's return was part of a deal announced July 1 in which al-Maliki accepted proposals from the bloc for five candidates to fill the several ministries that bloc members vacated last summer.

Brown's visit comes less than a week after the head of the British armed forces said troop levels in Iraq should start to come down over the course of 2009.

Air Chief Marshal Jock Stirrup, the chief of the defense staff, told the BBC that troop numbers will have be more "sustainable" given Britain's military involvement in Afghanistan.

On Friday, the White House said that President George W. Bush and Iraq's prime minister have agreed to set a "general time horizon" for bringing out more U.S. troops -- marking a dramatic shift from the administration's past refusals to discuss any kind of deadline or timetable.

The two men "agreed that the goals would be based on continued improving conditions on the ground and not an arbitrary date for withdrawal," the White House said in a statement.

All About Iraq • Gordon Brown