LONDON, England -- Britain's Princess Eugenie has been reprimanded by her school after being caught frolicking naked on college grounds, it was reported Saturday. 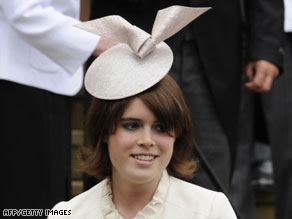 Princess Eugenie is sixth in line to the British throne.

The 18-year-old daughter of Prince Andrew, Duke of York, and Sarah Ferguson, was apprehended for her involvement in end of term "high jinks" at the exclusive Marlborough College, west of London, the UK Press Association said.

A royal source told the Press Association, "It was nothing more than high jinks at the end of term in May. A group of them were reprimanded and that's the end of the matter."

The tabloid Sun newspaper reported that a college staff member woke to playful shrieks and found several young women dancing around without clothes.

It said there was no suggestion boys were present or that drugs were involved but claimed a pupil said the students had been drinking.

Princess Eugenie, the sixth in line to the British throne, is studying art, history of art and English at the $46,000-a-year college, PA said.

It said the princess was expected to be among guests celebrating the official birthday of Queen Elizabeth II on Saturday.

A spokesman for the princess made no comment about the claims, PA reported.