(CNN) -- Two giant pandas arrived in Taiwan Tuesday after leaving China's Sichuan province for their new home, in a sign of improving ties between the cross-strait neighbors. 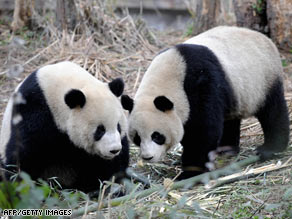 Tuan Tuan and Yuan Yuan, both four years old, had been living in Ya'an since the May 12 earthquake that damaged their former home in Wolong in Sichuan, according to the state-run Xinhua news agency.

The pandas ate a meal of steamed corn buns and carrots before they were placed in a truck and taken to the Sichuan capital of Chengdu. From there, they were flown to Taiwan.

"They had a good breakfast to sustain them on the long journey," said a Taiwan keeper traveling with the animals to the island, according to Xinhua.

The panda goodwill was the latest sign of warming relations between Beijing and Taipei.

Watch more about the pandas »

Regularly scheduled commercial flights, shipping and mail between Taiwan and China resumed last week for the first time since the 1949 revolution that brought the Communist Party to power on the Chinese mainland.

On Monday, the Taiwan Affairs Office of the State Council said China would provide 130 billion yuan ($19 billion) in financing over the next two to three years to Taiwan-based companies doing business in the mainland.

Taiwanese President Ma Ying-jeou has been cultivating ties with Beijing since winning office in March.

Ma, a Nationalist, opposes reunification with China but ran on a platform touting the economic benefits of better relations with the mainland.

In June -- in the first formal talks between the two sides in almost a decade --Chinese and Taiwanese officials agreed to set up permanent offices in each other's territories.

Taiwan separated from China after the communists' victory in the Chinese civil war in 1949. About 2 million Chinese Nationalists fled to Taiwan and set up a government there.

Beijing has always considered the island a part of China and has threatened to go to war should Taiwan declare formal independence.

China said in May 2005 it would give the island two giant pandas, but their departure was delayed for more than three years. Improved ties between the two sides made the delivery of the pandas possible, Xinhua reported.

The pair, whose names Tuan and Yuan together mean "reunion," will live in a four-story building at the Taipei city zoo, and their lodgings will include an outdoor playground, the agency said.

After a one-month quarantine, the pandas are expected to make their debut in Taiwan during the Chinese lunar new year.

There are about 1,590 pandas living in China's wild, mostly in Sichuan and the northwestern provinces of Shaanxi and Gansu. There were 239 captive-bred giant pandas in China in 2007, Xinhua reported.

One panda died in the May quake, while another is still missing, according to an official at the China Panda Protection Studies Center in Wolong.

All About Taiwan • China