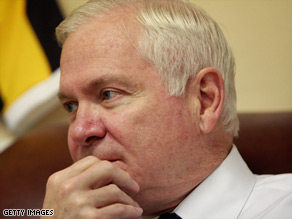 Gates landed Thursday in the Afghan city of Kandahar, where he was met by Gen. David McKiernan, the commander of U.S. and NATO forces battling a resurgent Taliban and its al Qaeda allies. Gates said the deployment will include one brigade that was scheduled to be sent to the 7-year-old conflict in January and two more that have yet to be named.

"I have not yet signed off on the specific units and I wouldn't want to speculate off the top of my head," said Gates, who has been held over by the incoming Obama administration.

McKiernan has requested four additional brigades, including the one scheduled for January deployment, between 14,000 and 20,000 troops. But in September, Gates said the Pentagon would be unable to commit new troops before spring or summer of 2009, partly due to its larger commitment to the war in Iraq.

The U.S. military has about 31,000 troops in Afghanistan, which is less than a quarter of its total strength in Iraq. However, the security agreement signed by the Bush administration and ratified by the Iraqi government in early December requires American troops to begin withdrawing from Iraqi cities ahead of a complete withdrawal by the end of 2011.

Gates told reporters ahead of his landing in Kandahar that the ideal size of the U.S. military presence in Afghanistan is still being debated, and that Americans needed to be "more sensitive" toward Afghan concerns about international troops on their soil.

"My view would be, I would like to put a lot more stress on accelerating the growth of the Afghan army," he said. "The history of foreign military forces in Afghanistan, when they have been regarded by the Afghan people are there for their own interest and as occupiers has not been a happy one."