BANGKOK, Thailand (CNN) -- Flights into Thailand have been thrown into chaos Wednesday after explosions at two Bangkok airports wounded four people and triggered the closure of its main international gateway -- a major hub in the region for travelers, authorities said. 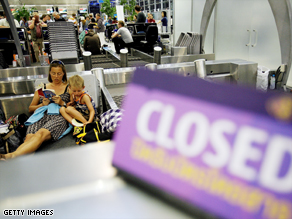 Passengers face a long wait inside Suvarnabhumi airport with most flights canceled.

The blasts come a day after thousands of anti-government protesters stormed the airports to protest the return of Thai Prime Minister Somchai Wongsawat from the APEC summit in Peru.

One blast occurred at Suvarnabhumi Airport at 5 a.m. (2200 Tuesday GMT), an airport official said. One person was wounded in that attack.

Three protesters also entered the airport's control tower, demanding the prime minister's flight schedule, The Associated Press quoted Group Capt. Chokchai Saranon, a control tower official, as saying. As the airport had been shut down, there were no controllers in the tower, AP reported.

Watch fists fly in the terminal »

Pro- and anti-government protesters also exchanged gunfire, a Thai police official said. Protesters with golf clubs and long wooden sticks also clashed with airport taxi drivers, with each side throwing things at the other.

The clash started when the anti-government group People's Alliance for Democracy (PAD) was mobilizing supporters near the Don Muang airport, which the government is using as its temporary office. iReport.com: Are you there? Send pics, video

The PAD has been leading protests against the government since May, accusing the government of being a front for ousted former Prime Minister Thaksin Shinawatra. Protesters surrounded the parliament building on Monday, forcing lawmakers to postpone their session.

Thaksin was ousted in a bloodless coup in 2006, only to return after the People Power Party won elections in December 2007

He left again in August of this year, shortly before he was to face trial on corruption charges.

In October Thailand's Supreme Court ruled that Thaksin had abused his powers while in office and sentenced the absent former leader to two years in prison. The case was one of several lodged against Thaksin, who protesters want to return to Thailand to face trial.

Thaksin stayed in the United Kingdom for much of this year before British authorities revoked his visa.

All About Thaksin Shinawatra • Bangkok • Thailand