KABUL, Afghanistan (CNN) -- Little Banafsha wakes up in her small mud home, has a cup of tea and braces herself for the day ahead. 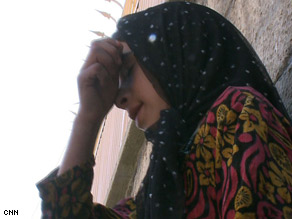 An exhausted Banafsha takes a moment's rest from begging for bread.

She is just 11 years old, but she is the breadwinner for her family. Literally.

Without the bread that she begs from strangers, she, her sisters, her baby brothers and her mom would all go hungry.

Her father is a drug addict, focused only on his next high; her mom cares for the little ones, and heavy responsibility falls on Banafsha's young shoulders.

Every day, she heads far from her home, trekking up and down steep hills to the wealthier parts of the Afghan capital, where she can but hope richer people will take pity on her.

She is not bitter, explaining: "My two younger sisters also work. They beg for bread and sell gum. There's no choice."

When she gets to the Wazir Akbar Khan district, a hangout of diplomats and aid workers, she unwraps her folded rice sack.

"Sir, do you have some bread?"

Watch Banafsha and other Afghan kids ask for help »

Banafsha clutches the bag tight as she walks from building to building, eyeing who will help and who will not.

"Sir, do you have some bread?" she asks again.

This is her recitation for the next six hours, as she darts around in her worn blue plastic sandals, knowing that danger could be there at any turn, even in this more affluent neighborhood.

"A few days ago, some girls were kidnapped around here, and many people have gone missing. The girls' mother still comes around here looking for them, but they still haven't been found," Banafsha says.

This time of the year, the sun begins to set at 4:30 p.m. in Kabul. But Banafsha continues to roam the dark streets. The 6 o'clock rush hour is her peak business time.

Her eyes well with tears, but she doesn't allow them to fall, quickly wiping them away and biting her thumb like the vulnerable child she is.

She prays every day: "I say, 'God, take me out of this poverty and have my father go work so I can go to school.' "

She dreams of being a teacher, and for three hours a day, she gets to be a little girl with big dreams.

On her way to beg, Banafsha stops off at a center run by an Afghan nongovernmental organization called Aschiana -- the name means "nest" in Dari -- for a little education, a little recreation and a glimmer of hope.

The first center opened in 1995 for 100 children. By June 2008, Aschiana had eight centers catering to 7,600 children in the capital city of Kabul alone.

The group thought it had secured a major source of funding in March this year, but the money never arrived. Four centers had to be closed in June, sending 4,000 children back to the streets without their three-hour reprieve.

Inside, Banafsha and the other children get to laugh. In every room there is a sense of serenity, whether the children are practicing brush strokes for calligraphy, tumbling around in judo or gliding their little fingers over the harmounia, a type of piano used in music class.

For now, the center is surviving on small private donations, but it is not enough. Aschiana stopped providing food for the children at three of the remaining centers because they couldn't afford it.

Without that relief, even more children head back to the streets to beg for the smallest morsels to fill their empty stomachs.

On a good day, Banafsha will trek back across the steep hills to the home she helped her mother build, with some bread in her bag and maybe 50 cents.

At home, the work continues. As the eldest sister, she tends to her siblings. Her mother relies on her help; her father is focused only on his next high.

Finally, she will sleep. But tomorrow, Banafsha will walk down into the crowded city streets again, among the estimated 60,000 other street kids in Kabul, dreaming of a better life.

All About Afghanistan • Foreign Aid