WASHINGTON (CNN) -- China has canceled or postponed several military exchanges with the U.S. in reaction to last week's announcement that the U.S. is selling weapons to Taiwan, a Defense Department spokesman said Monday. 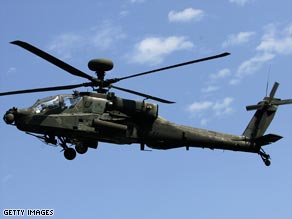 Apache attack helicopters are part of the $6.4 billion weapons deal between the U.S. and Taiwan.

Officials announced last week an intention to sell $6.4 billion in arms to Taiwan, though the deal still needs to be approved by Congress.

Maj. Stewart Upton said the sale does not violate the Taiwan Relations Act, which allows the United States to provide Taiwan with items for self-defense

Taiwan split from the Chinese mainland in 1949 and the United States has vowed to support them if China initiates an unprovoked attack.

The arms deal comes at a time when the United States needs China in negotiations over Iran's and North Korea's nuclear programs.

"The Chinese reaction is unfortunate and results in missed opportunities," Upton said. "We feel that the global security environment calls for U.S. and [Chinese] officials to maintain close relations to address common security challenges."

The "bilateral events" China called off or postponed involve "senior level visits and humanitarian assistance/disaster relief exchanges" scheduled to happen by the end of November, he said.

The Chinese ambassador was said to be on his way to the State Department Monday afternoon to protest the proposed weapons sale to Taiwan.

One U.S. official said the tension with China will not affect the role China is playing in negotiations with Iran or North Korea over its nuclear program.

The official declined to speak for attribution because of the sensitive diplomacy involved.