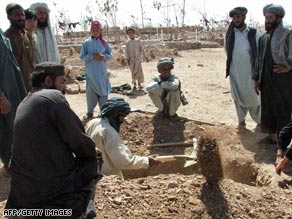 "I offer all Afghans my sincere condolences and personal regrets for the recent loss of innocent life as a result of coalition air strikes," Gates said at a news conference outside the U.S. Embassy in Kabul.

"While no military has ever done more to prevent civilian casualties, it is clear that we have to work even harder."

Hamid Karzai » and with members of the Afghan national security team, including Minister of Defense Abdul Rahim Wardak.

U.S.-led coalition forces have been battling a resurgent Taliban in Afghanistan, and they have stepped up airstrikes on suspected insurgent strongholds.

Afghanistan's government and the U.N. Assistance Mission in Afghanistan concluded that 90 civilians were killed in an August 22 airstrike in the western Afghan province of Herat.

The U.N. mission said it found "convincing evidence" that 60 children, 15 women and 15 men were killed in the strike.

An initial investigation by the U.S.-led coalition in Afghanistan, released this month, found that 30 to 35 Taliban militants and five to seven civilians were killed.

But when cell phone pictures were later provided to the U.S. military showing dozens of bodies at the scene of the strike, the top U.S. military commander in Afghanistan, Gen. David McKiernan, asked U.S. Central Command to review the initial investigation.