(CNN) -- China's Olympic adventure may be over, but new age chanteuse Sa Dingding is one global export that in many ways echoes the Beijing Olympic fantasy of "One World. One Dream." 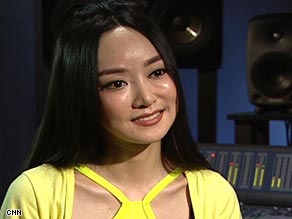 Sa Dingding's music should find a home on the iPods of millions of chill-out world music fans.

Born to a Mongolian mother and Han Chinese father, she sings in Mandarin, Tibetan, Sanskrit, and the rare dialect of Lagu, while fusing chill-out beats and floaty instrumentation played on zither, horse head fiddle and bamboo flute.

Already hugely popular in China, she has been finding similar success farther afield: Her first album sold 2 million copies in Southeast Asia, and she has appeared on MTV. Earlier this year she won a BBC Radio 3 World Music Award as well as performing at the Royal Albert Hall in London.

Her linguistic skills and musicianship were honed from a young age.

Born in Inner Mongolia in 1983, she spent three years until the age of 6 with her grandmother, living a nomadic life in northern China, where her imagination and creativity were allowed to roam free.

"We actually lived in a small city between grassland and the big city. In spring time, we move to the grassland. And in winter time, we moved back to the city,"she told CNN's Talk Asia.

"The whole memory of my childhood is in one word: Play. I just played everywhere on the grassland. And there a lot of interesting things happened which affected the ... life of mine."

Later she became a student of Buddhism and yoga as well as becoming a multi-instrumentalist, releasing her first album at the age of 18.

Melding different musical cultures and ethnic influences, notably Tibetan, has also caused a certain amount of discussion, especially on her own position toward the status of Tibet within China.

Aiming to avoid controversy, organizers of the Glastonbury festival dropped her from this year's lineup.

"I don't quite understand the reason behind [it]. To me, art and music really belong to the whole world and they shouldn't be limited by boundaries. So I really hope that I could join Glastonbury next year," she said.

Until then further explorations in language and music beckon, and there have been recent collaborations with house music DJ Paul Oakenfold and French chill-out duo Deep Forest in Europe.

"It's very amazing because when I had to return to China, they drove me to the airport and told me: 'Life is full of miracles. When you first arrived here, these three songs didn't exist. But now you're leaving, and we have three wonderful new songs.'"