JAIPUR, India (CNN) -- Baby Manjhi has no nationality, no legal mother and no clear path home from India to Japan to a father and grandmother who desperately want her. 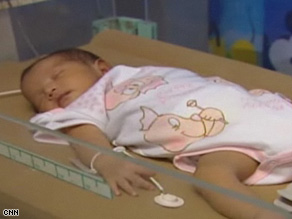 Baby Manjhi, a surrogate child, has been stuck in legal limbo. Her adoptive parents divorced before her birth.

"From deep inside my heart, I want to return immediately to my own country with my grandchild," said Emiko Yamada, the girl's grandmother.

At just two weeks old, Manjhi Yamada is stuck in legal limbo -- the offspring of commercial surrogacy and a divorce before she was even born.

Some countries and parts of the United States have banned surrogacy as a money-making venture, but India legalized it in 2002. Under the practice, infertile couples are matched with local women to carry babies for $12,000 to $30,000.

It's a booming business, worth an estimated $445 million a year.

"Cheap mothers are available here. There is so much poverty. ... It's employment for them," says Dr. Sadhana Arya with India's Arya Hospital.

"You have treated the surrogate mother like an object, used her as a factory, produced something, given money for it."

But, she says, the final product "is a live child."

Arya, who is part of the team now treating Manjhi, says such pregnancies -- dubbed "wombs for rent" by critics -- can have a broader human toll. She feels especially anguished for the father and grandmother in this case.

"It is absolutely traumatic, especially for the grandmother, because they have a visa for a limited period of time," Arya said. "What happens if the period expires? How do they manage the problem? Where do they leave the baby? Where does the baby stay? Who cares for the baby?"

Baby Manjhi was created when a Japanese husband and wife paid a clinic in India to have the husband's sperm and an anonymous donor's egg implanted in the womb of an Indian surrogate.

The plan worked. But a few months before Manjhi was born, the Japanese couple divorced. The intended Japanese mother decided she did not want the baby as well.

She was born July 25 in Anand, a town near Ahmedabad in western India. Kaival Hospital, which contracted with the couple to create the child, has become extremely popular with foreigners from around the world who want surrogate children.

As soon as Manjhi was born, her father, Ikufumi Yamada, and grandmother traveled from Japan to pick her up and take her to her new home. But Indian law stopped them. In order to get a passport for the baby, the mother must be present.

In this case, neither the birth mother nor the mother who had originally sought the child wanted to be involved.

Manjhi's father looked into a legal adoption, but Indian law says a single man is not fit to adopt a baby girl.

The Japanese Embassy says it cannot help without some sort of travel documents from India as well.

"I think obviously India owes an obligation to speed up the legal and judicial process so that the child is able to travel as soon as possible," said Indira Jaising, a senior advocate for India's Supreme Court.

Then, with Manjhi stuck in legal limbo, she became sick and had to be hospitalized. Without her birth mother around, the tiny child refused to eat and became dehydrated. She also contracted septicemia.

Her father and grandmother were heartbroken as they found themselves in a legal mess with a sick baby girl in a country where they didn't know the law and didn't speak any of the languages.

The father, who happens to be a doctor, has gone back to Japan to see patients and seek further legal counsel. The 70-year-old grandmother, Emiko Yamada, has stayed put.

Uneasy about how the baby was created, she comes to the hospital to cradle her granddaughter day and night, and has become so attached, she says, she cannot imagine going home without Manjhi.

"I am very worried and stressed. Why can't they let her father take his child?" the grandmother says.

Arya is one of two doctors now caring for the child. Her hospital had nothing to do with the surrogacy. Baby Manjhi was brought to her hospital in Jaipur because the Yamadas had a friend there who could help them communicate.

The doctors have stabilized Manjhi. When they heard the extent of the child's legal jeopardy, their immediate reaction was to get personally involved.

"I think this should end. There should be stricter laws," Arya said.

From Japan to America, people are coming to India in droves for surrogates. Peter Kaestner with the U.S. Embassy in India says demands on its staff from U.S. citizens with surrogacy issues in India are on the rise.

"Half of the citizenship cases that they do now in Mumbai are from surrogates," Kaestner says.

In this case, it's a Japanese national who is facing the tangled legal and ethical issues surrounding the business of surrogacy.

As for Manjhi, there is hope. She has finally been issued a birth certificate with just her Japanese father's name on it, which might be enough to get her visa to travel to Japan.

"I will not leave India without her, no matter what," the child's grandmother says.

All About Surrogacy • India • Supreme Court of India