DHARAMSALA, India (CNN) -- Gedun Gyatso, a 27-year-old Tibetan Buddhist monk, is so devoted to the Dalai Lama that when he was in prison, he placed a picture of him next to his pillow in open defiance of his jailers. The gesture earned Gyatso another month of incarceration on top of the three years he had served for his political activity. 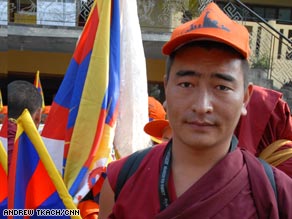 But today, Gyatso stands in defiance of the Dalai Lama's "middle way" approach to the long struggle between China and Tibetans over the fate of their homeland. The Tibetan spiritual leader's moderation is being challenged by a new generation at odds with his willingness to accept Tibetan autonomy within China rather than push for full independence.

"His Holiness says it's up to the Tibetans to choose their future, and I choose complete independence, and so do most Tibetans. As we saw in the uprising last March," Gyatso said.

Gyatso is one of a new breed of Buddhist activists who are on the front lines of battles to win democratic freedom. These Buddhist warriors struggle to maintain their religious convictions of compassion and nonviolence while challenging powerful autocratic regimes.

CNN spoke to Gyatso as he and 80 other monks, who are living in exile from Tibet, were preparing to take part in an 850-mile protest march from Dharamsala, India, to the Tibetan frontier. Their march was timed to coincide with the run-up to the Olympics, to bring maximum exposure to their demands for Tibetan independence from China.

They are part of a young generation of monks who are willing to put their lives on the line for a political cause. But these insurgents are not carrying weapons. In fact, when CNN met them in India, they were attending a training course in nonviolent protest, inspired by the likes of Mahatma Gandhi and Rosa Parks.

"I stand for the cause of Tibetan independence. But as a monk, I will never deviate from nonviolence," Gyatso said.

Watch: Some of the Dalai Lama's unruly flock »

Unlike many monks, Gyatso cuts an imposing figure -- tall and muscular -- like many of the Tibetan nomads and farmers from the wild eastern region of Kham. As a boy, he spent summers herding yaks in the high mountains and chasing away wolves with stones and slingshots. But Gyatso dreamed of achieving much more. At age 13 he enrolled in the nearby Podma Monastery and began the rigorous study of Buddhist texts.

Learn about Tibet's history of conflict »

"I wanted to become a monk because it gives me a sense of peace, " he said.

In the fight for freedom and democracy, their weapon is peace. Go inside the world of Buddhism with CNN chief international correspondent Christiane Amanpour.
Saturday & Sunday, 8 p.m. ET

But when he was 16 years old, that peace was broken by Tibet's gathering political storm. Tibet had been part of China since a 1950 invasion by newly victorious Chinese Communist forces. In the mid-1990s, reacting to pro-independence protests by Tibetans, Chinese authorities stepped up a "patriotic re-education" campaign.

Gyatso says they forced monks to denounce the Dalai Lama and declare their allegiance to the People's Republic of China. But the elderly abbot in his monastery refused, saying he would rather give up his monk's robes than denounce his spiritual guide. After the abbot was arrested, Gyatso and other young monks plastered protest posters on the walls of their monastery. It didn't take long for the authorities to react.

"In prison they beat me so badly that I couldn't walk or eat," Gyatso remembered. "My cell mates put food in my mouth because I couldn't chew."

But the worst was to come. Gyatso says the guards handcuffed him and forced him into a room filled ankle-deep with water.

"Then it felt like I was hit by a giant hammer, and I passed out," he said.

Gyatso says he was knocked unconscious by electric shock, and for the next 10 days, he couldn't walk, talk or see straight. He says Chinese interrogators were trying to extract a confession from him to find out who had masterminded his monastery's protest.

"Even when I was badly beaten, my mind never faltered, because I knew I stood for the truth," he said. "They are destroying what I hold most sacred: my religion, my culture and my cause. The more they tortured me, the stronger my faith grew."

The Chinese government declined CNN's repeated requests for an interview.

Gyatso's faith may soon be tested again as he approaches the culmination of his march to Tibet. After he was released from prison in China, Gyatso escaped over the Himalayas to continue his studies in the Sera Monastery in southern India, a center of the Tibetan exile community.

But when he heard about the pre-Olympic protest march, he was one of the first monks to sign up. In March, on the 49th anniversary of Tibet's failed uprising against Chinese rule, the marchers began their quixotic quest.

For three months, Gyatso and 80 monks slowly approached the Tibetan border, despite arrest by Indian authorities and pleas from Tibet's government in exile to suspend anti-Chinese protests.

Gyatso's march coincided with the largest protest Tibet had seen in decades. More moderate Tibetans didn't want to further inflame the situation, but a nonviolent uprising is exactly what the marchers wanted.

"We were hoping there would be an uprising in Tibet on the 10th of March, but our march was not the trigger that set it off. The severe repression of our people is what did it," Gyatso said.

When Tibet's initially peaceful protests turned into anti-Chinese riots on March 14, Gyatso and his fellow monks condemned those who strayed from nonviolence and acknowledged that the Dalai Lama was helping "keep the peace."

In June, when Gyatso and the other marchers were within sight of Tibet, they were stopped and arrested again by Indian authorities, who would not let them proceed further.

The five organizations of exiled Tibetans who had sponsored the march called it off, but Gyatso and many of the other monks vowed to continue their movement.

"The Chinese authorities hope that once the older generation of Tibetan activists is gone, it will all be over," Gyatso said. "But what I've learned on the march is that when the Dalai Lama passes away, a new younger generation of activists will step in."

All About Buddhism • China • Tibet