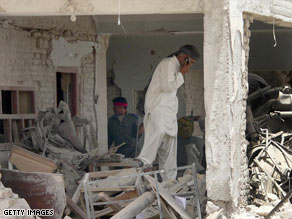 Militants used explosive-laden trucks to destroy the walls of the Afghan prison.

Officials have not yet confirmed whether the insurgents who were killed or captured in the Saturday raid in Kandahar province were part of the nearly 400 Taliban militants who escaped from a Kandahar prison on Friday.

A U.S. military statement said the insurgents, who were holed up in a farming compound west of Rawonay, fired at troops who then retaliated with an air strike.

Authorities continued to search for the escaped prisoners Sunday. Afghan security forces have said looking for them will be tough in some areas, if not impossible in others. The Taliban is entrenched in the region, which is replete with militants' hideouts. The militants may have gone to two regions of Kandahar province with a large Taliban presence -- Maiwand and Zherai districts.

"Therefore it's all the more reason for us to work harder and to keep building Afghan institutions and Afghan intelligence and be a lot more steadfast in our resolve in confronting terrorism."

The Taliban militants escaped from the prison Friday during a planned commando-style attack. Militants used suicide truck bombs loaded with about two tons of explosives to blast holes in the mud brick walls of the Soviet-era prison, a Taliban spokesman said.

A gun and rocket battle between the militants and prison guards lasted several hours and ended with dozens of militants rushing inside on motorcycles to free all prisoners inside -- including the nearly 400 Taliban fighters, the Taliban spokesman said.

The prison, one of the most notorious in Afghanistan, held a number of arrested Taliban leaders. Several had recently embarked on a hunger strike.

Police sources say the strike freed a combination of suicide bombers and cell leaders who had been captured over the past six years in various combat operations targeting the Taliban.

There were 1,059 prisoners in the prison at the time of the attack and 167 of them remain in the prison, the second largest in the country and controlled by the Afghan government.

Analysts -- who say the effort amounts to a huge psychological victory for the Taliban in southern Afghanistan -- note that this was the latest of three commando-style attacks in the country in recent months. The attacks reflect the sophistication of the militants and efforts to win the hearts and minds of the Afghan citizenry.

They include the attempted assassination in April of Karzai at a military ceremony and the strike on the five-star Serena Hotel in Kabul. Both are suspected as al Qaeda jobs as well.

The al Qaeda terror network attacked the United States Sept. 11, 2001, while during the Taliban's rule over Afghanistan. A U.S.-led invasion toppled the Taliban government, but the militant group developed into a potent insurgency.

The incident comes as violence rages in Afghanistan's southern provinces, a major front in the fight between NATO-led troops and the Taliban.

All About The Taliban • Afghanistan • Hamid Karzai