(CNN) -- No one expected to find Donna Molnar alive. 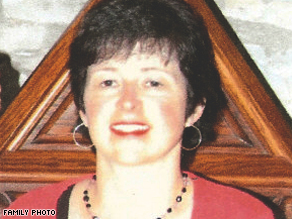 Searchers had combed the brutal backcountry of rural Ontario for the housewife from the city of Hamilton, who had left her home three days earlier in the middle of a blizzard to grocery shop.

Alongside his search-and-rescue dog Ace, Ray Lau on Monday tramped through the thick, ice-covered brush of a farmer's field, not far from where Molnar's van had been found a day earlier.

He kept thinking: Negative-20 winds? This is a search for a body.

Lau rushed to his Dutch shepherd's side.

"There she was, there was Donna, her face was almost totally covered except for one eye staring back at me!" he said. "That was, 'Wow!' There was a thousand thoughts going through my head. It was over the top."

With one ungloved hand near her neck, Molnar, 55, mumbled and tried to scream as Lau yelled to other rescuers. Dressed in a leather coat, sweater, slacks and winter boots, Molnar was carefully extracted from a 3-foot-deep mound of snow that had apparently helped to insulate her.

Watch how the rescuers found Molnar »

Then, rescuers got their second shock.

"She was lucid, and said, 'Wow. I've been here a long time!' and then she apologized and said, 'I just wanted to take a walk, I'm sorry to have caused you any trouble,' " said Staff Sgt. Mark Cox of the Hamilton Police Department, one of the leaders in the hunt. "And we're all thinking this is incredible, this is really something."

"I've been doing search and rescue for seven years, and this is the wildest case I've had in finding someone alive," he said.

She was rushed to a hospital and immediately sedated to begin the agonizing steps of hypothermia treatment.

"I think the snow must have worked to trap her body heat, and that's what really saved her," Cox said. "This really speaks to what's possible."

David Molnar is calling his wife's survival his "Christmas miracle."

He wasn't able to speak with her immediately after she was taken to the hospital. But while she was under sedation, he leaned over her and whispered in her ear, "Welcome back, I love you."

"My wife, you know, doesn't pump iron. She is strong physically and spiritually," he said. "When people say to me how do I explain how she survived, I said I believe God reached down and cradled her until the rescuers could find her, because there's no rational explanation."

In addition to hypothermia, Donna Molnar is being treated for severe frostbite, and her recovery will take months.

But his wife's condition was upgraded Wednesday from critical to serious. "That may not sound like a great thing to everyone, but to us, that is the best news we could possibly get on Christmas Eve," David Molnar said.

As for Ace, he's still awaiting his reward: a T-bone steak. It's the least that can be done for a dog who, in his own way, paid it forward.

"A while ago, Ace was rescued from a home where he didn't belong, and now he got to rescue someone. I can't describe the magnitude of that, what that means to me," Lau said.

All About Hamilton (Ontario) • Dogs