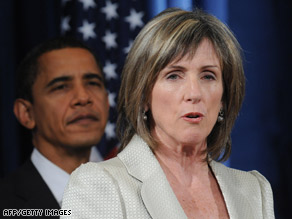 Carol Browner was one of four key environmental nominees named by Obama.

Sutley, a prominent supporter of Sen. Hillary Clinton's bid for the Democratic presidential nomination, is the first high-ranking gay appointee to the Obama administration.

"In the 21st century, we know that the future of our economy and national security is inextricably linked with one challenge: energy," Obama said at a news conference to introduce his energy team.

"We've seen Washington launch policy after policy, yet our dependence on foreign oil has only grown, even as the world's resources are disappearing," he said.

"This time has to be different. This time we cannot fail, nor can we be lulled into complacency simply because the price at the pump has for now gone down from $4 a gallon."

Obama called Chu "uniquely suited to be our next secretary of energy" for his work on new and cleaner forms of energy. Chu, who runs the Lawrence Berkeley National Laboratory in California, won the 1997 Nobel Prize in physics and is highly respected in energy circles.

Browner, who was administrator of the Environmental Protection Agency in the Clinton administration, was named to be the nation's first "climate czar," working inside the White House on policy issues.

He said that Jackson, as commissioner of New Jersey's Department of Environmental Protection, helped make that state a leader in reducing greenhouse gas emissions and developing new sources of energy.

"Lisa also shares my commitment to restoring the EPA's robust role in protecting our air, our water, and abundant natural resources so that our environment is cleaner and our communities are safer," Obama said.

Sutley has been "at the cutting edge" of environmental work on the municipal and regional level, Obama said. She will be "a key player in helping to make our government more efficient in coordinating our efforts to protect our environment at home and around the globe," he added.

Los Angeles Mayor Antonio Villaraigosa praised the appointment of his deputy mayor to a national post.

"With Nancy on my team, we have made tremendous progress -- from quadrupling our renewable energy portfolio to exceeding the targets set out by the Kyoto Protocol four years ahead of schedule," he said in a written statement.

Energy is one aspect of the president-elect's goal to create 2.5 million jobs by 2011. The plan aims to put Americans to work updating the country's infrastructure, making public buildings more energy-efficient and implementing environmentally friendly technologies, including alternative energy sources.