BOGOTA, Colombia (CNN) -- Colombian President Alvaro Uribe announced Wednesday he is releasing all information on his and his family's income to show he did not invest in or make money from pyramid schemes that have defrauded millions. 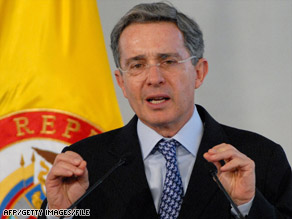 Uribe said he is releasing the information because some of the people running the frauds have told potential investors that he and his sons also have invested or are otherwise involved.

There also were allegations made in a congressional debate this week that Uribe's sons had been involved with one of the main companies accused of fraud.

"There's been slander against the good name of my family that I feel I must defend," a somber and angry-looking Uribe said in a short nationally televised speech.

Officials have said the pyramid schemes took in at least $200 million from 3 million people this year. In the past five years, authorities said they believe the businesses took in $1 billion.

Uribe said he is releasing the income information, dating to his youth, to help the government's continuing fight against fraud.

"I do it in respect to the Colombian people, for transparency and to strengthen the moral authority in order to keep battling all the expressions of the crime," he said.

The president also defended his two sons, Tomas and Jeronimo.

Officials last week arrested the head of a Colombian company accused of defrauding millions of investors. David Murcia Guzman, president of a company called DMG, was arrested in Panama and immediately deported to Colombia.

Also last week, the Colombian government declared a state of emergency, allowing officials to take over businesses that have used pyramid schemes to steal millions from 3 million investors. The government immediately took over 60 DMG branches and shut the company's doors. Officials said they hope to liquidate some of the company's assets to repay defrauded investors.

The emergency decree also stiffened jail time and fines for anyone found guilty of fraud.

The government said the businesses defrauded the public by purporting to offer a sure investment.

Speaking about the emergency measures last week, Interior Minister Fabio Valencia decried "the Mafia-like mentality" of those "who want to obtain easy money."

All About Alvaro Uribe • Colombia