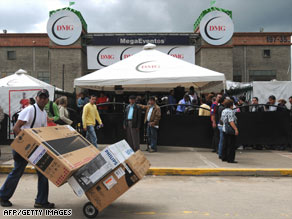 Investors protest outside the headquarters of DMG, one of many companies accused of defrauding the public.

That was the name of one of the businesses in which millions of Colombians deposited their life savings after being promised short-term returns of as much as 150 percent.

But government officials say the businesses were pyramid schemes that raked in at least $200 million from 3 million people.

Sergio Munoz is among those who lost their savings.

"That was for my children," he said. "Now, it comes to light that they have robbed us. It was with complicity of the authorities who permit this -- knowing that it is illegal for it to be permitted."

The government says the businesses defrauded the public by offering false promises of a sure investment.

Wilson Rodriguez handed over the equivalent of $80,000 to a money man who offered him what he thought were assets in hotels and property in exchange.

Now, he doesn't know whom to approach.

"I don't even have enough to care for my family," he said. "I lent money and what I make from my salary goes to pay off debts. I have nothing. I lost everything."

Infuriated investors have demonstrated outside the headquarters of several companies in question across the nation.

Worried that the situation has already led to physical altercations and riots, President Alvaro Uribe asked that authorities act immediately to bring those responsible to justice.

"We are asking the public prosecutor to speed up the resolution of the cases," he said. "The national police has handed to the prosecution the power to intervene in pyramids."

Treasury Minister Oscar Ivan Zuluaga said the government is not to blame.

"The government had advertised all this time about the illegality of this operation, warning Colombians not to let themselves be defrauded, not to take their money to these illegal activities," he said.

Meanwhile, some observers complain that, though the investors may shoulder some blame, the government could have mitigated their losses by moving more quickly.

And, they note, some of the alleged pyramid schemes continue to stay in business.

All About Colombia • Alvaro Uribe