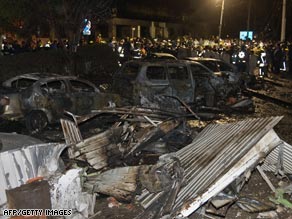 The scene of Tuesday night's plane crash in Mexico City was one of panic and confusion, a witness says.

A witness described "moments of panic and confusion" after the crash, as burning people asked for help and others ran from the scene.

The crash injured 40 people on the ground, said government spokesman Marcelo Ebrard. All eight passengers and crew on board the plane were killed, the spokesman said. Two of the dead are women, Mancera said.

In Mexico, the minister of the interior oversees domestic affairs, particularly national security, law enforcement and the war on drugs. It is Mexico's second-most-powerful post.

Vasconcelos was one of Mexico's top experts on the fight against narcotraffickers and was said to have a price on his head.

"I want to express my deepest condolences to the families of the victims and my absolute support during this difficult time," Calderon said.

Mourino, he said, "was one of my closest colleagues and one of my best friends. ... With his death, Mexico loses a great Mexican."

At least 12 cars were burned and two buildings were damaged, Notimex said.

Watch video footage of the aftermath of the crash »

No cause for the crash was immediately given, but Calderon assured the nation that the results of the investigation will be made public.

The Learjet 45 did not explode in the air, said Luis Tellez, secretary of communication and transportation.

When there is an explosion in the air, Tellez said at a news conference Wednesday, pieces of the airplane are scattered over a wide area. But the wreckage in this instance was limited to a small area, he said.

Tellez said Wednesday the pilot did not report an emergency, Notimex said.

An audio recording released Wednesday of what Mexican officials said was dialogue between the pilot and the airport control tower did not appear to have an emergency call from the aircraft. The recording could be linked to off the Notimex Web site.

The plane was traveling from the north-central city of San Luis Potosi to Mexico City, Calderon said. The cities are about 220 miles (355 km) apart. The Learjet was built in 1998 and carried identification call letters of XCVMC, Tellez said.

Agustin Arellano, director of the federal agency that oversees Mexican airspace, said the aircraft's flight path, altitude and velocity were within accepted standards for a landing at Mexico City's Benito Juarez International Airport.

The information was retrieved from the airplane's flight data recorder, Arellano said at the news conference with Tellez.

The U.S. National Transportation Safety Board said it has sent a team of investigators, led by senior aviation accident investigator Joe Sedora. The team includes technical advisers from the NTSB, the Federal Aviation Administration, Learjet and Honeywell International, it said.

Mourino had just given a speech in San Luis Potosi, detailing the administration's efforts to combat drug traffickers, kidnappers and other criminals.

"It was decided to combat criminal groups with all available power in order to confront them, to reduce them and to fulfill the essential mandate of all authority, which is none other than to guarantee peace, tranquility and security for its citizens," Mourino said in his speech.

Calderon has unleashed federal police and soldiers in several states across Mexico and tightened controls on money laundering and corruption among local and municipal police forces, which have been infiltrated by drug traffickers.

The effort has resulted in widespread carnage, with more than 3,000 deaths this year.

At the scene of Tuesday's crash, taxi driver Raymundo Bernal, 28, told Notimex that he witnessed the event.

"I heard a strong roar and then saw four people who were burning and asking for help while the rest ran and the tops of trees were burning," he said.

"The ambulances took 10 minutes to arrive, but several of the people who were burning were not moving, and what followed were moments of panic and confusion."

More than 100 federal police secured the area, while the military took control of the airport at San Luis Potosi, Notimex said.

Mourino, 37, studied in the United States, receiving an undergraduate degree in economics from the University of Tampa. He did post-graduate studies in accounting and finance from the Universidad Autonoma de Campeche, his government biography says.

After serving in municipal government in Campeche, Mourino was a regional coordinator for Vicente Fox's successful presidential candidacy in 2000. He later served in the Mexican federal congress and in the Cabinet.

He was chief of the president's office from December 2006 to January 2008.