(CNN) -- Two Russian bombers have landed at a Venezuelan airfield, from which they will carry out training flights for several days, the Russian Defense Ministry said Wednesday. 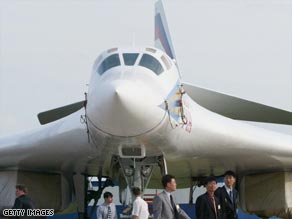 The Tupolev Tu-160 strategic bombers landed at Venezuela's Libertador military airfield and "will spend several days carrying out training flights over neutral waters, after which they will return to the base," Interfax reported, citing the Russian Defense Ministry.

Col. Alexander Drobyshevsky, a ministry spokesman, told Interfax that NATO fighters followed the bombers on their 13-hour flight over the Arctic Ocean and the Atlantic.

"All flights by air force aircraft have been and are marked by strict conformity to the international rules on the use of air space over neutral waters," Drobyshevsky told Interfax.

The U.S. will monitor the Russian training, said Pentagon officials who asked not to be identified because they were not authorized to speak on the information.

On Monday, Russia announced it might hold joint naval maneuvers with Venezuela in the Caribbean. The declaration came in the wake of increased tension between Russia and the United States over Russia's invasion last month of the former Soviet republic of Georgia, a U.S. ally that aspires to join NATO.

Russia on Monday denied any link between that announcement and the conflict in Georgia, although Russia has criticized U.S. support for Georgia, and Venezuelan President Hugo Chavez has long antagonized Washington.

"If Russian long-range bombers should need to land in Venezuela, we would not object to that either. We will also welcome them," Chavez said on September 1, according to Novosti.