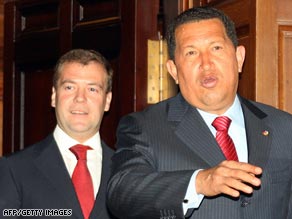 The two countries hope to sign an agreement for Venezuela to buy Russian military equipment, said Vyacheslav Davidenko, a spokesman for Rosoboronexport, Russia's government agency in charge of arms exports.

The agreement will allow "quick deliveries of arms and military hardware in the interests of Venezuela's security with the observance of international obligations and the laws of both countries," Davidenko told CNN.

Davidenko wouldn't elaborate on the types of weapons that Venezuela wanted to purchase -- or the cost. Previous military-technical contracts had been worth $4 billion, he said.

The Associated Press reported the deal could be worth $2 billion.

Venezuela is expected to spend over $30 billion under a program to rearm its armed forces up to 2012, the Interfax source said. According to Russian media reports, Russia could provide a loan of about $800 million to Venezuela to finance the arms deals.

Neither the Russian Foreign Ministry nor the Venezuelan Embassy in Moscow were disclosing a detailed schedule of Chavez's visit.

In addition to visiting Moscow, Chavez plans to go to the region of Ingushetia, in southern Russia, "to study its experience in solving humanitarian problems," according to the Russian Foreign Ministry.

The tiny province of Ingushetia, near Chechnya, has been a hot spot over the past decade. Islamist rebels there frequently attack Russian servicemen and law enforcement officials.

During his visit the two nations also planned to sign several agreements related to oil and gas, the Venezuelan president told journalists.

"We need to sign a whole set of documents, including a financial agreements," he said, adding that the parties will discuss, in particular, how to set up a joint Russian-Venezuelan bank.

Russia and Venezuela must consolidate their efforts to tackle the food crisis, Chavez said.

"We must create a food shield. While some are creating a missile shield, we want to create a hunger shield," the Venezuelan president said.