(CNN) -- Armored cars patrolled the streets of Zimbabwe's capital and residents flocked to banks Thursday after limits on cash withdrawals were lifted in the inflation-ravaged African nation. 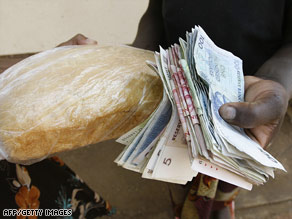 With prices rising even more than once a day, shopping is a mathematical proficiency test for Zimbabweans.

The Reserve Bank of Zimbabwe had capped maximum daily withdrawals at 500,000 Zimbabwean dollars -- about 25 U.S. cents, and about a quarter of the price of a loaf of bread. But faced with mounting chaos in a country already in economic free fall, the bank decided last week to raise that limit to 100 million dollars ($50 U.S.) per week.

Soldiers were deployed to all banks in anticipation of throngs of people lining up to withdraw money Thursday, when the increase took effect. Wednesday, police chased depositors away and arrested union leaders who planned to protest the limits.

Zimbabwe's inflation rate of 231 million percent is the world's highest. In addition, the country is faced with a growing outbreak of cholera that its government declared a national emergency Thursday.

The outbreak has killed at least 565 people and sickened more than 11,000, the U.N. Humanitarian Affairs Office said. Medical professionals blame the resurgence of the water-borne disease on the lack of safe water in many parts of the country.

The Zimbabwe Congress of Trade Unions said 69 people were arrested across the country during Wednesday's demonstrations. Amnesty International has demanded to know the whereabouts of human rights activist Jestina Mukoko, whom it said was abducted at dawn Wednesday by armed men in plainclothes posing as police.

And angry, unpaid soldiers clashed with foreign currency exchangers and some civilians Monday, three days after troops who had failed to get cash from their banks looted shops they suspected to be illegally dealing in foreign currency.

All About Zimbabwe • Amnesty International