JOS, Nigeria (CNN) -- Calm returned to Jos on Monday as hordes of police and military personnel descended on the central Nigerian city to enforce order after three days of deadly Christian-Muslim riots. 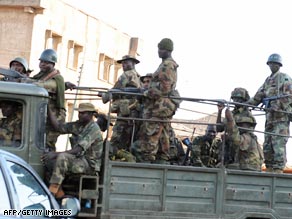 Soldiers patrol the streets in Jos after the riots.

Authorities imposed a 24-hour curfew on some parts of the city and a dusk-to-dawn curfew in the rest.

As day broke, people milled about and surveyed the damage from the riots. Burned-out buildings, mosques and churches greeted them. Several families were seen leaving the city, with belongings in tow.

"It's pretty clear they are definitely trying to keep the lid on things," said CNN's Christian Purefoy, who visited the area.

A local religious leader told CNN Sunday that more than 340 people have been killed in the three days of fighting. The central mosque in the city said it alone buried 209 people.

Sheikh Khalid Abubakar, the imam of the mosque, said the violence stemmed from a local election for a "government council" in which a Muslim candidate was running against a Christian candidate. The results of the election were disputed by both sides, and the disagreement sparked the clashes.

"We do not feel secure," said Abubakar. "Our homes and mosques have been targeted and burned to ashes. We have many people who have been displaced."

The violence is the worst in Nigeria since 2004, when up to 700 people died in Plateau State during Christian-Muslim clashes.

Jos, the capital of Plateau State, lies in Nigeria's "middle belt," where dozens of ethnic groups live in hotly contested land separating the Muslim north from the predominantly Christian south.

Nigeria, the most populous country in Africa, is on a fault line between Islam and Christianity that crosses the continent from the Indian Ocean to the Atlantic.

The violence is a major challenge for the government of President Umaru Yar'Adua, who came to power in a 2007 election that was criticized by international observers.

Few Nigerian elections have been deemed fair since independence from Britain in 1960, and civilian rule has often been interrupted by military takeovers.

More than 10,000 Nigerians have died in sectarian violence since civilian leaders overthrew a military junta in 1999. Political strife over local issues is also common and government offices control huge revenues from the oil industry.