(CNN) -- Armed men entered a Congolese camp for displaced people Friday to kidnap and rape a girl, but when the girl screamed, the gunmen fired shots, killing a 20-year-old woman, a U.N. spokesman said. 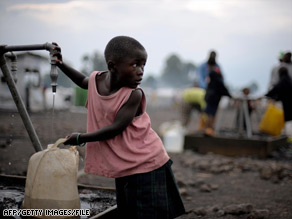 A girl fills a jug with water at the camp for internally displaced people in Kibati, Congo, on Thursday.

The camp in Kibati, near Goma, is home to thousands of people seeking refuge from warfare between a Tutsi militia and Congolese forces. The fighting is an offshoot of the Hutu-Tutsi animosity that culminated in the 1994 genocide of 800,000 Tutsi and moderate Hutus in neighboring Rwanda.

The U.N. Security Council has approved 3,000 troops to bolster the 17,000-strong peacekeeping force charged with the daunting task of stemming violence in the Democratic Republic of Congo's North Kivu province.

Mahecic said he did not know whether the gunmen involved in Friday's attack were with the Tutsi militia or Congolese military.

"We have seen both sides doing this," he said.

He said the men entered the camp about 1 a.m. The girl yelled for help, and people came out of their huts to see what was happening. Shots were fired, killing a young woman.

The armed men forced some families out of their huts and looted the dwellings, Mahecic said.

UNHCR has repeatedly expressed concern for the safety of the 67,000 internally displaced Congolese civilians in Kibati camps.

"The fact that the camps are so close to the front lines is a huge cause of concern for us," Mahecic said.

The agency says there has been "relative calm" in North Kivu this week, allowing officials to develop a displaced persons camp more than 9 miles from Kibati, on the outskirts of Goma, the North Kivu capital. The new camp is supposed to alleviate some of the strain on the burgeoning Kibati camps.

Friday's "incident adds more to the pressure to move these people as soon as possible," Mahecic said.

The warfare between Congolese government forces and rebels under the command of Laurent Nkunda represents the lingering tensions between Hutus and Tutsis in neighboring Rwanda.

Rwandan Hutus who fled to Congo after the massacres feared returning home, believing they would be targeted for revenge by Tutsis, who now dominate the Rwandan government. Rwandan Hutus remained in the jungles of eastern Congo, where they preyed on local residents and participated in Hutu militias.

Nkunda, a Tutsi and former Congolese army general, has repeatedly blamed the Congolese government for not protecting Tutsis from Rwandan Hutus in Congo.

A January cease-fire between Nkunda's forces and the Congolese army fell through in August. Nkunda's forces launched an offensive, and an estimated 250,000 people have fled their homes amid the fighting, which also has drawn in militias allied with the government.

Nkunda declared a unilateral cease-fire October 29, but fighting and reports of atrocities have continued.

The U.N. special envoy to Congo, former Nigerian President Olusegun Obasango, met with Nkunda earlier this week. Rebels pulled back from a strategic area after the meeting.

Jaya Murthy, spokesman for the U.N. Children's Fund in Goma, said that 1.1 million North Kivu residents -- about 20 percent of the population -- have been displaced in violence since December 2006.

Murthy said he heard reports Friday of looting and an unconfirmed report of a person burned alive in Kanyabayonga, north of Goma. Farther north, thousands have fled the town of Kanya and are "hiding in the bush" after fighting there, the U.N. reported.

The U.N. is transporting therapeutic milk by helicopter to Kanya and Kanyabayonga to feed hundreds of malnourished children.

Many civilians are on the move across North Kivu to escape the warfare, Murthy said.

UNICEF has issued a statement on humanitarian conditions in North Kivu, saying there is a "very high risk of child deaths due to malnutrition, malaria, respiratory infections."

Cholera is endemic, it said, and threatens to worsen without latrines and clean water.

UNICEF offered only one nugget of good news: Two schools in the Kibati settlement have reopened after people who occupied the schools moved out.

In Rutshuru, 85 percent of schools remain closed, affecting 150,000 students. Plans to pass out school kits are under way after Nkunda's group said it would reopen all schools next week.

"Today, there's still insecurity," Murthy said, adding that aid workers have limited access to many areas and a planned humanitarian corridor has yet to open.

Aid organizations have long said the enormous African country -- which borders nine nations and is more than twice the size of Alaska -- is suffering a humanitarian disaster. World Vision says the conflict in Congo, ongoing since 1997, is the deadliest since World War II.

"The last decade of conflict has resulted in some 4 million deaths; an estimated 1,200 people die every day due to ongoing epidemics and war-related causes; some aid agencies estimate upward of 1,400 deaths per day," the Christian relief organization said in a news release.

All About Democratic Republic of the Congo • United Nations