(CNN) -- Britain and France are calling for an additional 3,000 United Nations troops in the Democratic Republic of Congo, where the U.N. already has its biggest peacekeeping mission, a senior British diplomat said Wednesday. 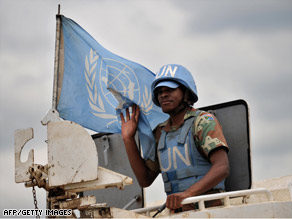 A U.N. peacekeeper rides atop an armored vehicle last week in Goma, Democratic Republic of Congo.

Mark Malloch-Brown, the British Foreign Office minister for Africa, the Middle East and the United Nations, announced a draft resolution on the troop increase while on a four-day mission to the war-torn Congo.

Britain expects the U.N. Security Council to adopt the resolution by the end of the week, a spokeswoman for the British mission to the United Nations said.

The resolution follows calls from the United Nations' own peacekeeping experts, Human Rights Watch, and local human rights groups in Congo for more troops to support the 17,000 U.N. soldiers already there.

A coalition of 44 organizations in eastern Congo wrote to the Security Council on Tuesday, pleading for more troops.

"This would help to prevent the atrocities that continue to be committed against civilians on an ever greater scale here in North Kivu [province], on the border of Rwanda and Uganda," the coalition wrote.

Fighting between government forces, allied militias and rebels under the command of Laurent Nkunda has forced an estimated 250,000 people to flee their homes since August.

"The population has thus been immersed in unspeakable suffering. In the last few days, fighting has drawn closer to large populated areas, such as the town of Goma. Fighting has also invaded and torn apart the region of Rutshuru, particularly in the town of Kiwanja, where hundreds of civilian deaths have now been recorded."

"The world is failing in its responsibility to protect the Congo's innocent civilians," Juliette Prodhan, the head of Oxfam in Congo, said in a statement released November 13.

Watch international efforts to avoid a health catastrophe in Congo »

"There has been an increase in incidents of forced labor, rape and widespread brutality, according to assessments carried out by international agency Oxfam over the past week, as armed men from all sides prey upon those who have sought 'sanctuary' from the fighting in North Kivu" province, she said.

Another aid group, World Vision, says the conflict in the African country is the deadliest since World War II.

"The last decade of conflict has resulted in some 4 million deaths; an estimated 1,200 people die every day due to ongoing epidemics and war-related causes; some aid agencies estimate upward of 1,400 deaths per day," World Vision said in a statement.

The local groups in Congo specifically requested help from the European Union, which can deploy military units faster than the United Nations can.

Georgette Gagnon, the executive director for the Africa division of Human Rights Watch, said she also would like to see the European Union send troops.

"Our concern is that it is going to take three months [for the United Nations] to get anybody on the ground," she said. "Our request is for the EU to send a bridging force. The EU has done this in the past for the Congo, and they have the capacity to get people on the ground within two weeks."

The "goal would be provide civilian protection, to do patrols and other things that would prevent looting, pillaging and raping by either the Congolese troops -- which are doing this -- or the rebel group," she said.

The European Union has not announced plans to send troops to police the conflict.

A spokeswoman for the British mission to the United Nations said London is "not ruling in or out EU forces," instead focusing on strengthening the U.N. presence in eastern Congo.

All About Democratic Republic of the Congo • United Nations • European Union