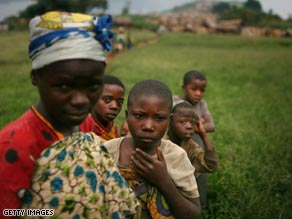 Thousands of people have been forced to flee the latest violence in Congo, according to U.N. estimates.

Ban, who has said he is "deeply concerned" about the violence, told an emergency summit in Nairobi, Kenya, that the continued attacks and instability were worsening the "desperate" situation.

Rwanda and Uganda border the volatile North Kivu province in eastern Congo, where most of the fighting is taking place.

The conflict is driven by unresolved ethnic hatred stemming from the killings of a half-million Tutsis by Hutu militia in Rwanda and Congo's civil wars in 1994.

The United Nations and Human Rights Watch say more than a million people have been displaced by the latest fighting in Congo. Most went to U.N.-protected camps in Congo, but hundreds of others fled to neighboring countries.

At least 100 civilians have been killed and more than 150 wounded during the past eight weeks, Human Rights Watch says.

Ban called "for an immediate cessation of hostilities and the withdrawal of forces to positions held prior to the resumption of fighting on 28 August," when the latest conflict broke out.

Ban urged all armed groups involved in the fighting to support efforts to find a political solution, and "to avoid activities that result in the further displacement and suffering of the civilian population."

The head of the U.N. mission in Congo said at the summit Friday that additional peacekeeping battalions were needed in eastern Congo. The mission, known by its French acronym MONUC, is already the largest U.N. peacekeeping force in the world with more than 17,000 troops.

Alan Doss said MONUC has managed to stabilize all but the eastern part of Congo, and he wants additional battalions rapidly deployed to that region.

The presidents of Kenya, Tanzania, Burundi, South Africa and the African Union were also at the summit, which comes amid reports of heavy civilian casualties.

"Eyewitnesses in Kiwanja told Human Rights Watch that at least 20 persons were killed and another 33 wounded during a battle for the town and in the cleanup operations by Nkunda's forces that followed," the group said in a statement.

After the rebels re-established control of Kiwanja on Wednesday, Human Rights Watch said, the rebels ordered all 30,000 residents of the town to leave. They then sought out and killed civilians, particularly men, whom they accused of supporting their enemies, the groups said.

"People in Kiwanja said they heard screams into the night and saw bodies on the streets the following morning," Human Rights Watch said. One of those killed was a journalist working for a local radio station, the group said.

"The killing of civilians, the destruction of camps, and the forced return of displaced people are all war crimes," said Anneke Van Woudenberg, senior Africa researcher at Human Rights Watch. "Nkunda and Mai Mai commanders should immediately order their troops to stop committing such horrible abuses and hold to account those commanders who are responsible."

The fighting broke out at the end of August between the Congolese army and Nkunda's rebel forces. The conflict is complicated by outside forces and a variety of armed groups fighting both the government and each other.

Some analysts say Rwanda is Nkunda's principal supporter. Rwanda denies that, and for several years has been asking for the disarming of Rwandan Hutu rebels, many of whom are in eastern Congo.

The summit comes a year after another meeting in Nairobi, at which the Congolese and Rwandan governments signed a joint communique to resolve the issue of Rwandan Hutu rebels.

In the communique, they agreed that illegal armed groups were a threat to their countries and the region, and they agreed to take military and nonmilitary action to eliminate that threat.

The countries also agreed to stop arming, financing, or supporting armed groups in any way.