UNITED NATIONS (CNN) -- Sudan has asked for an emergency meeting of Arab foreign ministers ahead of the expected indictment of the country's president for genocide and crimes against humanity in Darfur, according to reports. 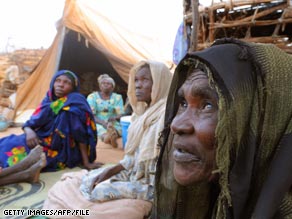 CNN revealed Friday that International Criminal Court Chief Prosecutor Luis Moreno-Ocampo has scheduled a news conference Monday, just after he is expected to file the warrant with the court.

If the warrant is issued it would make Omar Hassan al-Bashir the first sitting president to be indicted by the ICC for genocide.

The Sudanese ambassador to the United Nations told CNN Friday that the ICC had indicated to Sudanese officials that al-Bashir may be charged over the five-year campaign of violence in the country's Darfur region.

The prosecutor said in a progress report last month to the Security Council that Sudan's "whole state apparatus" had been mobilized "to plan, commit, and cover up crimes" in Darfur.

The U.N. estimates that some 300,000 people have died in the conflict and more than 2.5 million have been forced from their homes since 2003.