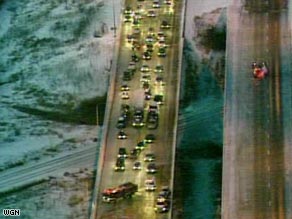 Traffic backs up Monday on a Chicago, Illinois-area highway after an early-morning accident.

More than 130 miles of the New York State Thruway were shut down for a time Monday morning from Henrietta, near Rochester, to the Pennsylvania state line. Dozens of vehicles slid off the icy roadway, CNN affiliate WIVB-TV in Buffalo, New York, reported.

Even after the highway was reopened, officials warned of icy pavement and poor visibility from blowing snow.

See the scenes of winter across the U.S. »

According to the National Weather Service, Buffalo got a record 7.4 inches of snow on Sunday, and several more inches were in the forecast for Monday, the first full day of winter.

Police agencies in western New York were advising motorists not to leave home. Two New York towns, Wales and Lancaster, banned travel altogether, WIVB reported. iReport.com: What's it like where you are?

On the other side of the country, long lines formed before dawn Monday at airline counters at Seattle-Tacoma International Airport, where two major carriers, Alaska Airlines and Horizon Air, suspended service Sunday.

The Federal Aviation Administration was reporting no delays at the airport Monday afternoon, but Alaska and Horizon said they would only resume limited operations.

Some travelers may have to wait until midweek or later to get flights out of the airport, CNN affiliate KOMO-TV reported. Supplies were running low at airport concessions for those enduring the wait, the Seattle station said.

To the south, travelers also spent the night in the Portland, Oregon, airport after airlines canceled many flights on Sunday. Airlines canceled more than 100 flights at Portland International Airport on Monday, CNN affiliate KATU-TV reported.

Watch a roundup of the worst winter weather »

More than 11 inches of snow was on the ground Monday morning in Portland, CNN affiliate KGW-TV reported, an amount not seen since 1968. Vehicles on all Portland roads were required to have snow chains, KGW said, but drivers were advised to stay off roads completely.

Seattle's Amtrak station also was packed with stranded holiday travelers after the winter storm stopped trains in their tracks Sunday in the Pacific Northwest.

In Marysville, Washington, workers at an industrial complex Monday morning found the roof of a building there had collapsed, apparently because of heavy snow, according to CNN affiliate KIRO-TV. The structure is used by a company that manufactures steel buildings; no injuries were reported.

"We had just installed brand new computers in the building, and so we're really just still trying to assess the damages to the university," university spokeswoman Danita Hoskin told WRTV.

It was 2 degrees, with a wind chill of minus 17 degrees, at 7 a.m. Monday in Indianapolis, according to the National Weather Service.

In Greene County, Ohio, near Dayton, a 79-year-old woman died after being found outside her home on Sunday, CNN affiliate WHIO-TV reported. It was 6 degrees in the area at noon Monday.

Car travel was often dangerous Sunday in parts of the northern United States.

In Mount Pleasant, Wisconsin, a newspaper deliveryman died of heart failure caused by hypothermia a day after his car became stuck in a snowdrift on his route early Sunday, officials told CNN affiliate WISC-TV.

A snowplow driver found Donald L. Blum, 54, of Monticello, about seven hours after Blum's car became stuck. Blum was taken to a hospital, where he died Monday, WISC reported.

Before he died, he told authorities that he had stayed with the vehicle because of the severe weather and because he had certain health conditions, WISC reported.

In western Michigan's Berrien County, drivers blinded by blizzard conditions drove into a 30-vehicle pile-up on Interstate 94 on Sunday afternoon. Dozens of other vehicles also were involved in a series of other nearby wrecks, including one that killed a 31-year-old Illinois man, police said.

Michigan resident Eric Teschke said he had just told his friend who was driving that they should probably slow down when trouble began.

"Vehicles were actually crashing right in front of us, and there was really nothing we could do except to try to stay out of the way and try to get to the people and keep them in their vehicles where they could be safe," Churchill said.

White-out conditions and the pile-ups forced police to shut down a six-mile stretch of I-94 near Lake Michigan for hours Sunday afternoon.

Many Californians, however, welcomed the snowfall that blanketed the Sierra Mountains.

"We're Southern Californians, so a chance to be in the snow is a wonderful, wonderful day for the kids," said one mother as she waited for snow chains to be fitted on her tires for a day trip into the mountains Sunday.

The wind and cold will add to the misery of those who are snowbound, he said.

"Some gusts have been 30 to 40 mph," Eckert said. "Temperatures over the upper Great Lakes have fallen below zero, and those cold temperatures are going to move to New England states on Monday. We'll see wind-chill temperatures below zero over much of the Northeastern U.S."

In Illinois, Chicagoans were warned to stay inside as subzero temperatures and high winds continued to sweep the area, WGN said. About 9,300 customers in northern Illinois were without power Sunday night.

It was so cold in Minneapolis-St. Paul, Minnesota, the Target Holidazzle Parade was canceled Sunday night because of dangerous wind chills, KARE-TV reported. By Christmas Eve, the high is forecast to reach only 16 degrees, but with mostly sunny skies.