(CNN) -- Sodden and crumbling, the Pin Oak levee was the only thing standing between Winfield, Missouri, and the flood-swollen Mississippi River on Wednesday. 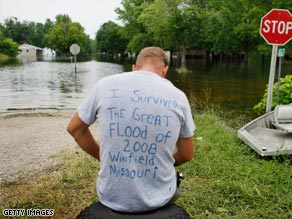 James Burt sits on an embankment near a neighborhood inundated with floodwaters in Winfield, Missouri.

"The currents are already doing enough to our levees, but a 2-inch wake can cause an entire levee to break," said Andy Binder, public information officer for Lincoln County Emergency Operations Command. "Right now, we are using the Missouri State Water Patrol to keep people from using their boats around the levees."

On Tuesday, the 2½-mile levee was hit by a "down slide" along a 160-foot section of its northern wall. The Army Corps of Engineers rushed in with sandbags and extra dirt for the base to keep the soil from slipping further.

The Army Corps of Engineers and Army National Guard announced Wednesday that the troubled section had been fixed, but a 100-foot-long slide west of the original was starting to crumble.

For the 5,000 residents of Lincoln County, it is now a matter of waiting and hoping the levee holds until the Mississippi crests and begins to fall.

The river level stood just above 37 feet Wednesday on its secondary crest, 11 feet above flood stage, and is expected to crest again Saturday afternoon at 37.5 feet, The Associated Press reported.

At Winfield High School, halls normally dominated by teens are being shared with volunteer workers and evacuated families in the school's gymnasium, which has served as an American Red Cross rescue shelter since June 16.

"Right now, I'm feeling pretty desperate and in need," said Sam Payne, who is staying at the high school with his wife and two children.

Payne, who left his home June 17, watched as water rose to the roof after one of the first levee breaches.

"It's positive that my family is still together," he said. "We're trying to hold back [our emotions]. The hard part -- the working part -- is going to be after the water finally recedes."

About 20 Lincoln County residents are completely dependent on the emergency center at the high school, according to the American Red Cross.

"What we have been doing is feeding people three times a day, even those who aren't sleeping in the gym, and giving others food and snacks to take home with them," said Dan Flippen, the shelter's manager. "Luckily, the turnout of the businesses have been outstanding up here, and the school's principal and staff have been gems for us." iReport.com: Take a flood tour of Lincoln County, MO

The administration and staff memberse have been cleaning, cooking and making space inside the school for people who have been displaced by the flooding. Students have also been taking time to help.

"The students here are constantly trying to help out in the gym," Flippen said. "We have to turn anyone who isn't 18 away, but most of those kids just go outside and sandbag."

While the gym has been turned into a makeshift headquarters for the Red Cross and Salvation Army, the Army Corps of Engineers has created a loading depot for levee sandbags behind the school.

Rescue officials were rushing to fill to 50,000 sandbags to fortify the levee. They brought in 200 tons of sand and called on anyone who wants to volunteer in the sandbagging effort to report to the high school.

Their efforts have been vital to keeping the Pin Oak levee intact and protecting the southern end of Winfield. But with the river approaching its cresting level, sandbagging activities at the high school will stop Sunday afternoon, according to Binder.

While they wait, officials watch the water levels and keep boats away from the levee. The Missouri State Water Patrol is also looking out for potential looters and people breaking into unattended cars. Only a few incidents have been reported, and law enforcement released a statement saying those caught looting flood victims would be prosecuted "with the utmost prejudice."

Evacuations are still being scheduled for people in areas close to the rising water, and the Red Cross and Salvation Army are stocking up on supplies from individual donors, local businesses and the St. Louis Red Cross chapter.

Pending the rains, the weather service said the river wouldn't begin to recede at St. Louis -- where there is flooding, but it is not significant -- until Thursday night. Forecasters said the last point on the river to finish cresting would be near Chester, Illinois, about 80 miles south of St. Louis, on Friday.

Early Tuesday, water broke through one of the main levees in neighboring St. Charles County. Officials working around the levee are required to wear life jackets, with the levee now able to "go at any time," according to Binder.

Even with the approaching water, residents are trying to remain optimistic.

"There have certainly been some tears shed here," Flippen said. "But people here are used to getting flooded, and they'll try to do the best they can.

"Just the other day, we had a a couple of guys who were driving from Oklahoma just to sandbag. It shows the type of effort people are putting in to help us out."

All About Floods • Missouri • U.S. Army Corps of Engineers