GLADSTONE, Illinois (CNN) -- Residents of this small town in Illinois, like many others who live along the banks of the surging Mississippi River, raced against the clock Tuesday to erect a makeshift levee as rising floodwaters threatened. 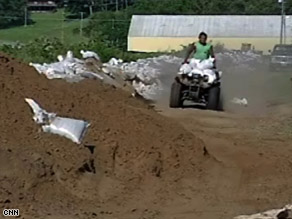 Residents of Gladstone, Illinois, work with the National Guard to create a makeshift levee.

"I'm not moving, not moving my business," said Byron Sebastian, a longtime resident of Gladstone, Illinois, who also serves on the city council. "We've got a lot of good people here helping to try to save this part of town."

Gladstone is one of many towns under threat Tuesday after rising waters breached a 300-foot area of a levee near Gulf Port, Illinois, before 5 a.m.

Levees all along the mid-Mississippi were being topped with sandbags Tuesday as the river, fed by its flooded tributaries, continued to rise.

Illinois Gov. Rod Blagojevich called up 1,100 National Guard members to assist in sandbagging efforts, said Patti Thompson of the Illinois Emergency Management Agency. She also said inmates are helping on the levees and others are bagging sand in correctional institutions.

"We were very, very disappointed that this levee broke today," said Thompson. "It's a very powerful river, and it can be hard to harness."

With the help of the National Guard, Sebastian and his fellow residents hustled Tuesday to build a barrier between Gladstone and the encroaching floodwaters.

Even though Gladstone is about four miles from the banks of the Mississippi, the rising floodwaters have submerged homes and created rivers where crop fields once stood.

The muddy townspeople worked with anxious resolve, cracking the occasional joke, as they filled bags with sand and dirt and loaded them onto ATVs.

On the receiving end were members of the Illinois National Guard, who piled up the sandbags as the tops of cornstalks rose above the waters behind them.

"Threats can happen in all shapes and forms, so we are trying to help out," said National Guardsman Capt. Lanny Finn, whose unit previously served in Iraq. "We'll be here for as long as we're needed."

Sebastian, who lived through floods in 1993, said he never thought he'd have to experience them again.

"We thought that was bad, but this is a lot worse than it was in '93," said Sebastian. "Now we got some lakefront property."

Elsewhere in Illinois, authorities closed the Great River Bridge on U.S. 34, which connects Illinois to Iowa over the swollen Mississippi, as authorities evacuated about 400 people in Henderson County.

The sheriff of Henderson County, where the Mississippi River borders the entire western edge of the county, said authorities are still concerned about the communities of Gulf Port, Carman, Lomax and Dallas City.

"It's been an uphill battle from the start, and the levee just broke loose," he said.

Sheriff John Jefferson of Hancock County, Illinois, said water was "very, very close" to the top of some areas of the county's two levees.

"We've had to evacuate some areas already, but the areas that have not been evacuated yet, we're just keeping our fingers crossed and hoping that the levee will hold," he said.

In two of the county's communities, Rio Vista and Pontoosuc, power has been shut off in all but 20 residences, a spokeswoman for the sheriff's office said.

Missouri also began to feel the force of the surging Mississippi Tuesday, as water began to top multiple levees east of Highway 79, forcing authorities to suspend sandbagging efforts at a levee near Foley, officials said Tuesday.

In Northwest Missouri, towns and cities along the Mississippi River were bracing for flooding later this week as swollen waters head downriver.

Communities at high risk of record flooding include Quincy, Illinois, and Hannibal, Missouri, according to National Weather Service modeling. Moderate flooding is possible later in the week in Alton, Illinois, and St. Louis, Missouri.

"The good news is the floodwater is receding in much of the state," said David Miller, administrator for the Iowa Homeland Security and Emergency Management Division. "The bad news is we're still in a flood fight."

President Bush said he and a team will travel to Iowa this week. State and federal officials also plan to meet there this week to decide the best way to house displaced residents, said Bill Vogel, a federal coordinator with the Federal Emergency Management Agency.

Watch a farmer boat through his fields »

"Across eastern Iowa, the flooding rivers have washed out railroad lines; Mississippi barge traffic has come to a halt and [flooding has] closed major roadways," said Harkin, the Democratic chairman of the Senate Agriculture Committee. "Thousands of Iowa businesses, large and small, have been impacted."

Harkin said Iowans "are a resilient and resourceful people," but will need "generous federal assistance" to recover.

By Tuesday afternoon, residents of Cedar Rapids, Iowa, where the Cedar River inundated more than 400 city blocks, were beginning to return home as the rivers lessened, said Lu Barron, a Linn County supervisor.

She estimated that thousands of people had returned to their homes after authorities inspected them to make sure they were safe.

The death of one woman whose body was found in her car Monday was determined unrelated to the floods, said Courtney Greene, a spokeswoman for the governor's office and the state Emergency Operations Center.

Amtrak service from Chicago, Illinois, to St. Paul, Minnesota, and to Kansas City, Missouri, was disrupted by the flooding.

All About Floods • Iowa • Cedar Rapids