(CNN) -- Boy Scouts were transformed into heroes when a deadly tornado blew apart their remote camp in western Iowa on Wednesday night. 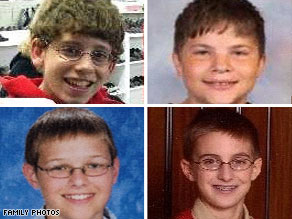 In what Iowa Gov. Chet Culver called "a blow right to the gut" Thursday morning, the storm killed four Boy Scouts and sent dozens of others to hospitals.

Broken trees and tattered remnants of tents were scattered throughout the Boy Scout campground midway between Sioux City, Iowa, and Omaha, Nebraska.

Nothing was left of a bunkhouse where Scouts had sought shelter and where a collapsed chimney trapped several victims.

Watch a tour of the devastated camp »

After all 93 Scouts and staff members were accounted for, stories of heroism began to emerge.

"These young men ... literally saved lives during this time period when emergency management could not get to them," Culver said. They "were the real heroes."

"They immediately started helping each other in this time of need [and] set up their own mini-triage unit."

Rob Logsdon, a 15-year-old staff member at the camp, said that although he was injured, he rescued some of his fellow Boy Scouts trapped underneath a collapsed chimney at one of the camp's four bunkhouses.

"I was standing up trying to pull bricks off the kids that were sitting there, and then I couldn't do any more because my hip and leg were hurting so badly," Logsdon said on CNN's "American Morning."

He dislocated his hip, sprained his ankle and was gashed in his knee when the tornado struck the shelter.

"We were sitting there watching lightning ... and we saw [the tornado] come around the end of a bluff toward the entrance of the camp," Logsdon said. "So we flipped on the siren, and the youth staff members ran to the assigned shelters."

The adult leader ordered everyone to get under the tables.

"All of a sudden, two seconds later, the tornado was on top of us," Logsdon said. "I know it picked up our adult leader's car and threw it 50 yards, easy."

Camper Ben Karschner said it was over quickly. iReport.com: See footage of the large-scale storm system

"Eight seconds, and the tornado passed. That was like the longest eight seconds I've ever had," he told CNN affiliate KETV in Omaha.

Thomas White, an 18-year-old Eagle Scout and staff member, said he lay on the ground with several of the younger Scouts as the tornado roared through.

"The grace of God helped us for sure," he said.

Logsdon said one of his friends was among the four killed.

"I went back to Little Sioux after I got out of the hospital, and his dad had just found out he died," he said. "He was my staff partner, and he was a good kid, and it's a big loss. He was a great kid."

"You see that bunkhouse, and in some ways it's amazing we didn't lose more lives than we did," Nebraska Gov. Dave Heineman said.

See images from the camp disaster »

"But those young Scout leaders, the adults who were there, they responded in true Boy Scout fashion, and I think we need to recognize them for what they did."

The boys at the ranch were advanced Scouts between 13 and 18 years old and were there for a week of training, said Lloyd Roitstein, president of the Mid-America Council of Boy Scouts of America. They had been through an emergency preparedness drill Tuesday, he said.

The storm that struck Kansas State University's campus destroyed a wind erosion lab, damaged several engineering and science buildings and tore the roof off a fraternity house at the school in Manhattan, said Cheryl May, the university's director of media relations.

"Our campus is kind of a mess," she said.

The storm destroyed up to 50 homes and damaged hundreds in Manhattan, said Lt. Kurt Moldrup of the Riley County Police Department.

"We had a lot of damage but very few injuries," he said.

A man was killed outside Soldier, Kansas, about 50 miles north of Topeka, said Sharon Watson, a spokeswoman for the state emergency management agency. His body was found outside his mobile home, she said.

A woman was killed in Chapman, Kansas, her body found in a yard, Watson said.

"The town took a direct hit," she said.

The storm destroyed 60 houses in Chapman, she said. Another 30 suffered major damage, and about 30 received minor damage, she said, citing early estimates from the American Red Cross.

The storms struck as Midwestern states deal with severe flooding along the upper Mississippi River.