(CNN) -- Cycling legend Lance Armstrong -- a survivor of testicular cancer -- and girlfriend Anna Hansen are expecting a baby, CNN learned on Tuesday through his charitable organization. 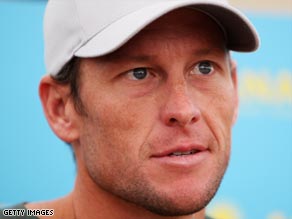 Cyclist Lance Armstrong has announced he will come out of retirement and race once again in the Tour de France.

The baby is due in June.

Armstrong was diagnosed in 1996 with testicular cancer that had spread to his brain, lungs and abdomen.

He underwent treatment for the disease and was able to return to cycling, eventually winning seven consecutive Tour de France's.

The harsh chemotherapy left him unable to have children, although he and then-wife Kristin Richards had three children using sperm the cyclist had donated before the treatment. Armstrong and Hansen, however, are expecting without the use of any artificial fertilization process.

"This is a hopeful thing for testicular cancer survivors," CNN medical correspondent Dr. Sanjay Gupta said. "It means his body healed from the chemotherapy and surgery."

Armstrong retired from cycling after his seventh Tour de France win in 2005, and focused his energy on the Lance Armstrong Foundation (livestrong.org), which supports people affected by cancer. Armstrong founded the organization in 1997.

The 37-year-old Texan announced in September that he was launching a comeback with the goal of winning the Tour de France in 2009.

"After talking with my children, my family and my closest friends, I have decided to return to professional cycling in order to raise awareness of the global cancer burden," he wrote on LiveStrong's Web site.

He is training for several races leading up to the Tour de France, including Australia's Tour Down Under and the Giro d'Italia.