Jet skids, passengers yell, 'The plane's going to blow up!'

(CNN) -- A passenger aboard Continental Airlines Flight 1404 described a scene of panic as the plane skidded off the runway while trying to take off and caught fire Saturday at Denver International Airport in Colorado. 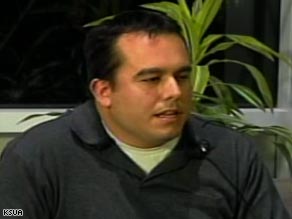 Passenger Gabriel Trejos says he saw an engine on fire as the plane skidded to a halt.

Only one of the 38 people taken to hospitals was listed in serious condition and none appeared to be burn victims, said Patrick Hynes, chief of the airport division of the Denver Fire Department. Bone fractures and bruises were the most common complaint, he said.

Trejos said when the plane hit the ground, he saw an engine on fire and seats buckling toward each other.

"It just seemed like it took forever for the plane to stop," Trejos said. "On my side of the plane I could see the engine, I noticed it was on fire. I could feel the heat coming from the window."

Airport officials said it was too soon to determine the cause of the accident or the fire.

The flight was bound for Houston, Texas, and was taking off at about 6:20 p.m.

Firefighters found the Boeing 737 on fire, with its wheels sheared off, resting in a ravine about 200 yards from the runway, Hynes said.

"They described a surreal scene when they pulled up, heavy fire on the right side of the aircraft, all chutes deployed from both sides of the aircraft, people evacuating and walking up the hillside towards them," Hynes said.

Hynes said the entire right side of the jet was on flames and "a heck of a firefight" followed.

"There was significant extension of fire into the cabin portion," he said. "There's significant fire damage inside with the luggage department described as melting and dropping down into the seats."

Hynes said fuel from the aircraft leaked for several hours after the mishap, but the fire was out.

"As far as we know, there were no fatalities and we believe no critical injuries," Denver International Airport manager of aviation Kim Day told reporters late Saturday.

Continental issued a statement late Saturday saying it was collecting information about the accident. The 112 people on the plane included five crew members.

Planes resumed takeoffs and landings at the airport after the incident, although Day said a section of the airport will remain closed into Sunday. She suggested passengers call ahead for Sunday departure times since many flights may be delayed.

A team from the National Transportation Safety Board (NTSB) was on its way to the scene to start an investigation.