(CNN) -- Sponsors of the California ballot measure that banned same-sex marriage are seeking to nullify thousands of marriages between gay and lesbian couples performed after the state Supreme Court ruled them constitutional. 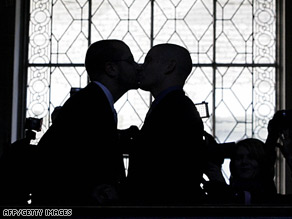 The passge of Proposition 8 left the future of thousands of marriages between same-sex couples unclear.

The sponsors Friday filed responses to three anti-Proposition 8 lawsuits with the state Supreme Court. The briefs also defend Proposition 8 against opponents' legal challenges, including an argument that the amendment needed a constitutional convention to be added to the state's constitution.

"We are confident that the will of the voters and Proposition 8 will ultimately be upheld," said Andrew Pugno, General Counsel for ProtectMarriage.com and the Proposition 8 Legal Defense Fund.

"Proposition 8 must be invalidated because the amendment process cannot be used to extinguish fundamental constitutional rights without compelling justification," Brown said in a written statement.

Rick Jacobs, founder and chair of the anti-Proposition 8 Courage Campaign, said he was "appalled" that the initiative's supporters wanted to nullify the same-sex marriages that are already on the books.

"The motivation behind this mean-spirited and heart-breaking action should not be allowed to be buried in legal brief," he said. "If Proposition 8's sponsors plan to destroy lives, they should at least have the courage to admit it publicly."

Opponents filed suit quickly after the November 4 election in which Proposition 8 passed 52 percent to 48 percent, effectively reversing a California Supreme Court decision that it was unconstitutional to deny marriage licenses to same-sex couples.

The vote also prompted a series of protests, some aimed at supporters of the proposition.

The proposition, which added an amendment to the state constitution, defined marriage as between one man and one woman.

"Proposition 8's brevity is matched by its clarity," one of the briefs read. "There are no conditional clauses, exceptions, exemptions, or exclusions: 'Only marriage between a man and a woman is valid or recognized in California.'

" ... Its plain language encompasses both pre-existing and later-created same-sex (and polygamous) marriages, whether performed in California or elsewhere. With crystal clarity, it declares that they are not valid or recognized in California."

Opponents are also seeking to have the amendment nullified, arguing that it alters the state's constitution -- meaning the state Supreme Court's May ruling -- and therefore, according to state law, is a revision that requires a constitutional convention. Proponents of the amendment disagree.

"Petitioners' challenge depends on characterizing Proposition 8 as a radical departure from the fundamental principles of the California Constitution," their briefs said. " ... But that portrayal is wildly wrong. Proposition 8 is limited in nature and effect. It does nothing more than restore the definition of marriage to what it was and always had been under California law before June 16, 2008 -- and to what the people had repeatedly willed that it be throughout California's history."

California voters passed a ballot initiative in 2000 that changed the state's Family Code to formally define marriage in the state between a man and a woman. After San Francisco Mayor Gavin Newsom performed same-sex marriages in 2004, which were promptly annulled, Newsom and others sought to have the ballot initiative struck down.

The California Supreme Court did so in May, and same-sex marriages were performed legally in California a month later.

The court's ruling said the right to marry is among a set of basic human rights "so integral to an individual's liberty and personal autonomy that they may not be eliminated or abrogated by the legislature or by the electorate through the statutory initiative process."

But opponents had already been at work on Proposition 8, seeking to enshrine the marriage definition in the constitution, and the initiative was approved for the November 4 vote.

Proposition 8 supporters also announced the addition of Kenneth Starr to their legal team. Starr will serve as lead counsel and argue their case to the Supreme Court.

Starr, the dean of Pepperdine Law School, investigated the suicide of Clinton deputy White House counsel Vince Foster and the Whitewater affair. The $70 million investigation turned up evidence of President Clinton's affair with Monica Lewinsky and led to Clinton's impeachment by the House of Representatives. He was acquitted by the Senate.