Behind the Scenes: Returning home to a GM town

Editor's note: In our Behind the Scenes series, CNN correspondents share their experiences in covering news. Here, Jim Kavanagh reflects on returning to his home state of Michigan to cover the crisis hitting U.S. automakers. 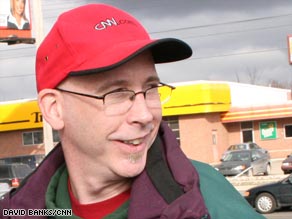 Jim Kavanagh returned to his hometown to report on the problems affecting the U.S. car industry.

LANSING, Michigan (CNN) -- The buildings are gone, but somehow their shadows remain.

I grew up on the West Side of Lansing, Michigan, maybe a quarter of a mile from the vast Fisher Body plant that stretched for blocks along Verlinden Avenue. Behind that green-windowed factory was an engine plant, and down by the Grand River along Logan Street was the hulking old assembly complex.

Farther west, on the other side of the railroad tracks just beyond where my friends and I played baseball at West Side Park, were three newer Oldsmobile factories that occupied dozens of acres on both sides of Saginaw Street.

It seemed as if almost every car on every street in Lansing was a Toronado, a Ninety-Eight, an Eighty-Eight or a Cutlass.

We lived in a house that would have been roomy if a family with fewer than 11 children had occupied it. Several of us were brought into the world by the perpetually whistling Dr. Spagnuolo at St. Lawrence Hospital two blocks away. We walked to school and church at Holy Cross.

Hear Kavanagh and relatives recall the sights, sounds and smells of the car plant »

There was a giant elm tree in our house's side yard, a beautiful maple in front, and a play house out back. At the end of the driveway we shared with our neighbors, a basketball hoop hung from the garage.

We boys got our hair cut -- yes, there was a time when we had hair -- at Bilow's barbershop. Fire Station No. 7, Augie's Sunoco and Warner's Drugstore were at the corner. We bought baseball cards and candy at the Wine Village, and milk and bread at Toolan's Delicatessen across from the Dime Store.

Our dad, Jack Kavanagh, was an industrial developer for the state Commerce Department, but he was a union man as well. Our mother, Catherine "Honey" Kavanagh, was the toughest, smartest, silliest "housewife" you might ever meet. (Possibly the shortest as well.)

Outside, and often inside, the smell of paint and the pounding of metal stamping machines filled the air. The metallic booms of switching boxcars were my nightly lullaby. I still find the sound strangely comforting.

My brother Mike Kavanagh and my sister Teresa's husband, Victor Pizana (who also grew up in the neighborhood), each put in at least 30 years with GM in Lansing. The other day, while Congress was debating an automaker bailout, Mike and Victor and I took a tour of the old neighborhood and surveyed the rubble of the old plants and the memories of the old days.

Lansing in the 1960s and '70s was a city that worked, in every sense of that phrase. It's still working, but not as much or as smoothly as it once did as General Motors struggles to keep up with a changing world.

The elm tree, the maple tree, Bilow's, Augie's, Wine Village and the Oldsmobile brand are all gone.

Nothing is the way it used to be, but neither is it the way it will be. The hardworking men and women of Lansing, who have been building cars and families for more than a hundred years, are perfectly capable of building a future.