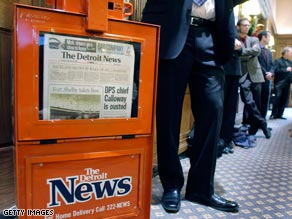 "We're fighting for our survival," said David Hunke, publisher of the Free Press and CEO of the Detroit Media Partnership, a joint operating agreement between the two papers. "We think its time to take a geometric leap forward in what we've known as newspapers."

Beginning sometime in the first three months of 2009, the two newspapers will provide home delivery on Thursdays, Fridays and Sundays only, Hunke said during a news conference in Detroit, Michigan. Papers will be on newsstands every day, and the papers' online offerings will be expanded, he said.

"The dynamics of delivering information to audiences has changed forever due to technology," Hunke said in a statement on the plan.

Costs for paper, ink and fuel to deliver papers were forcing the papers into cuts in newsroom talent that would damage their abilities to report the news, Hunke said. Paying for delivery vehicles to cover 300,000 miles nightly, he said, did not make economic sense at a time when 63 percent of readers have broadband Internet access.

As for those without computers and broadband access at home, "this isn't necessarily gonna be the best news for them," Hunke said.

"Our economics have become unsustainable," said Jonathan Wolman, publisher and editor of the Detroit News.

"We've got to embrace reality, and we've got to embrace innovation," said Paul Anger, executive editor of the Free Press, owned by Gannett Corp., the country's largest newspaper publisher. The Free Press, the nation's 20th-largest daily paper, had a daily circulation of 298,243 and 605,000 on Sunday as of the end of September. Those numbers were down almost 7 percent and 4 percent, respectively, from the previous six months, according to the Audit Bureau of Circulations.

The Detroit News, the country's 49th largest newspaper, is owned by MediaNews Group and had a daily circulation of 178,280 in September. It does not publish a Sunday edition.

The Free Press' circulation is down 19 percent and the News is down 22 percent since 2002, the Free Press reported Tuesday.

Hunke said the newspapers would face about a 9 percent reduction in their workforces under the plan. However no layoffs in their newsrooms, which he described as "fiercely competitive," were planned.

"We believe it will break the cycle of buyouts and downsizing" that has become common in the newspaper industry, Wolman said.

Newspaper publishers have had a rough year. Across the industry, daily circulation dropped 4.6 percent in the six months ending in September.

Gannett has been in the process of cutting 10 percent of its workforce across its 85 newspapers nationwide. McClatchy Co., the nation's second-largest newspaper company, has been pursuing cuts at its papers, including the Miami Herald. Tribune Co., which owns the Chicago Tribune and Los Angeles Times, among others, announced earlier this month it was filing for Chapter 11 bankruptcy protection.

The East Valley Tribune in Mesa, Arizona, a 100,000-circulation newspaper owned by Freedom Newspapers, announced in October it would move from a daily to a four-day publication beginning in January. The national Christian Science Monitor is moving its daily content online and dropping its daily print edition next year.

Anger said Tuesday that Detroit readers have been seeking those kinds of changes in how they get their news.

"Generations of readers are telling us they'd like information delivered in a different way," he said, promising "a fast reading, provocative news report in print as well as online."

The Detroit papers will price their three-day home delivery subscriptions at $12 a month, including a daily edition delivered by e-mail, Hunke said.

Wolman said mail subscriptions would be available to home-bound readers.

All About Newspapers • Media • Internet • Detroit