GM exec: Automakers likely will be back for more

(CNN) -- There's no indication when -- or if -- the White House and congressional leaders will reach agreement on the Democrats' proposal to give troubled U.S. automakers a financial lifeline. 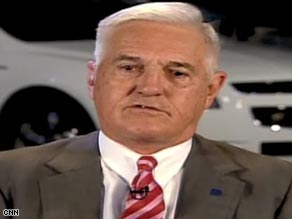 General Motors Corp. and Chrysler could get $15 billion in federal loans as soon as December 15, according to a working Democratic draft of proposed legislation and a senior Democratic congressional aide.

Meanwhile, one key GM official already is talking about the need for more help from the government -- even before this package's approval.

In an interview Tuesday on CNN's "American Morning," Bob Lutz, GM vice chairman of global product development, told anchor John Roberts that he expects the industry to go back to Washington next year for more money.

John Roberts: A lot of taxpayers are asking if you get this $15 billion collectively, what will you do to make sure your company won't fail?

Bob Lutz: Well, first of all, GM will only get a portion of that money and ... this is simply a bridge loan which will get us into the next administration, where we hope we can do something more fundamental. Because the main problem is the lack of liquidity and the lack of revenue flowing in as we're facing absolutely the lowest, lowest car market in history, and it's not just the domestics, the Japanese are all down 30 percent and 40 percent. Their inventories are piling up. You know, this isn't a question of Detroit is in trouble; the whole automobile industry is going to be in trouble

Roberts: You don't see Toyota and Honda coming to the government for a handout. But based on what you said there -- that this is just the beginning -- you're going to need more money next year?

Roberts: How much more?

Lutz: At this point, you know, that's going to have to be discussed with Congress. We'll have to see. But this is definitely a bridge loan that will solve the immediate liquidity problem

Roberts: When you come to Congress next year and say, OK, you gave us $15 billion in December, now we need X amount of money, how difficult a sales job will that be?

Lutz: You know, I don't think anybody in Congress or the president-elect assumes that this is all the money that is going to be required to bridge this liquidity crisis that the American automobile industry is facing, and, again, it all depends on how fast we have an economic recovery. Again, let me restate this. At 10.8 or 10.5 million total market, we do not have a viable automobile industry in this country for anybody.
iReport.com: How is the automaker crisis affecting you? Should there be a bailout?

Roberts: Yesterday, you took out a full page ad in the Automotive News Journal; it was a big mea culpa. I guess on GM'S part. You said in part we acknowledge we disappointed you. We violated your trust by letting our quality fall and our designs become lackluster. You also laid out a GM commitment to the American people. First thing, you said specifically we're committed to producing automobiles you want to buy and are excited to own. There are many people who might think that's just a fundamental tenet of free enterprise, and why should that be revolutionary?

Lutz: It isn't. I think people were expecting this sort of message. What we're trying to do with an ad like that is live down this legacy of the '80s. Everybody agrees that American cars of the '80s were not very good and were not competitive with the Japanese. But that was a long time ago.

Roberts: One more question, Bob, certainly, as a condition of this bridge loan, the government is going to appoint a car czar to oversee what you do with it. They will talk about what kind of models you should build, fuel efficiency you should get. There will be a government approval of any vehicles you make. Who would you like to see as the car czar?

Lutz: Wait a minute. We don't know if it will be a czar or overseer. I doubt whether this person would dictate the product policy.

Roberts: Certainly an idea they are talking about. Who would you be comfortable with as car czar?

Lutz: I wouldn't even -- other than myself? Unfortunately I'm not available because I'm still gainfully employed.

Roberts: Some people [are] floating the idea maybe [that former Massachusetts Gov.] Mitt Romney would be a good car czar. He comes down hard on you guys. His father [George Romney] ran American Motors for a time.

Lutz: Well, I hardly think that the automobile business is a genetic trait, but he would probably be satisfactory as would many other people.