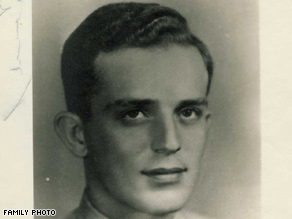 Bernard "Jack" Vogel died in a Nazi slave camp in the arms of a fellow U.S. soldier, Anthony Acevedo, in 1945.

"As Anthony Acevedo, one of the soldiers chosen, recently described to CNN, the Nazis picked those soldiers who looked Jewish, had a Jewish name or were considered 'undesirable,' " Reps. Joe Baca, D-California, and Spencer Bachus, R-Alabama, said in a letter sent to Geren last week.

"The trials and sacrifices made by those detained have largely gone unrecognized even to this day. As proud Americans, we wish to recognize and honor them for their service."

Both congressmen have pushed for a congressional resolution to honor the 350 soldiers held at Berga an der Elster, a subcamp of Buchenwald where dozens of American soldiers were beaten, starved and killed. Baca and Bachus say they will continue to fight for the resolution.

Listen as Acevedo tells brother of victim: "I had him in my arms" »

Army spokesman Paul Boyce told CNN that the Army is in the process of responding to the congressional letter.

"The U.S. Army has recognized hundreds of thousands of veterans of World War II and has expressed interest in this group's history to see what could be done," he said.

Anthony Acevedo was a 20-year-old medic when he was sent to Berga with the other soldiers in February 1945. Acevedo kept a diary that details the day-to-day events inside the camp and lists the names and prisoner numbers of men as they died or were executed.

Open up the pages of Acevedo's diary »

The soldiers were put on a forced death march in April 1945 as American troops neared. For much of that march, Acevedo pushed a wooden cart with emaciated men inside. Many of them died.

"More of our men died, so fast that you couldn't keep track of their numbers," Acevedo wrote on April 19, 1945, four days before he was liberated by advancing U.S. troops.

Asked what it would mean if the U.S. Army officially recognized the soldiers of Berga six decades later, Acevedo, now 84, wept.

"This is for all the fellas," he said.

Norman Fellman, another Berga survivor, was one of the men on the wooden cart pushed by Acevedo so many years ago. He said that wounded men and corpses were stacked on top of him -- and that he believed he could survive just one more day when he was liberated on April 23, 1945.

"There's a certain amount of pain involved when the country you serve fails to acknowledge the conditions under which you were kept," Fellman told CNN.

There are only 12 known Berga survivors still living.

It is difficult to ascertain exactly how many of the 350 U.S. soldiers died in captivity and on the subsequent death march. CNN has cross-checked a list of the names of 70 dead soldiers provided to the U.S. War Department after the war with the names of the dead listed in Acevedo's diary.

Watch as a soldier's diary sheds light on atrocities »

It appears the death toll was well over 100, roughly one in three soldiers. Acevedo says that more than 300 U.S. soldiers were alive at the start of the march, and that about 165 were left by the end. He says he was unable to keep track of the dead in the final days because soldiers were dying too fast.

"At Berga, captured soldiers were forced to endure inhumane conditions and suffer from the Nazi policy of physical destruction through labor," Baca and Bachus said in their letter to Geren. "Over 100 American soldiers either died at Berga or on the death march from the camp -- the highest number of American fatalities at any German camp."

U.S. soldiers who survived captivity were interviewed by the U.S. Military Intelligence Service in Europe after they were liberated. Before they were sent home, they signed a document that instructed them to never speak about their captivity.

"Some activities of American prisoners of war within German prison camps must remain secret not only for the duration of the war against the present enemies of the United States but in peace-time as well," the document says.

"The interests of American prisoners of war in the event of future wars, moreover, demand that the secrets of this war be vigorously safeguarded."

When Acevedo finally returned home, little had prepared him for his own father's reaction. "My dad told me I was a coward," he said.

Baca and Bachus said men like Acevedo deserve the respect of the nation: "We are writing to you to encourage the Department of the Army to acknowledge the heroism and sacrifice of those soldiers held captive at Berga in a manner appropriate for their service. It would be an honor well-deserved for the remaining survivors and the many colleagues that have gone before them."

Editor's note: To support the congressmen's effort, Spencer Bachus has asked for faxes to his Washington office at 202-225-2082, or send letters to Congressman Spencer Bachus, 2246 Rayburn Building, Washington, D.C., 20515.