WASHINGTON (CNN) -- Two methods the federal government wants to use to find terrorists -- "data mining" and "behavior detection" -- are dubious scientifically and have "enormous potential" for infringing on law-abiding Americans' privacy, a consortium of scientists said. 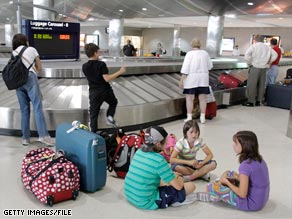 Data mining involves searching databases for suspicious and revealing relationships and patterns. But while the technique is useful in commercial settings to detect credit card fraud, it is questionable whether data mining can detect and pre-empt terrorist attacks, the National Research Council said.

"There is not a consensus within the relevant scientific community" that behavior detection is "ready for use ... given the present state of the science," the group said.

The group cautioned that "inappropriate ... responses to the terrorist threat ... can do more damage to the fabric of society than terrorists would be likely to do."

The 352-page report by the National Research Council, an arm of the National Academy of Sciences, does not evaluate the TSA or any other specific government program. Instead, it explores issues related to data mining and behavior detection techniques and attempts to advise lawmakers how to appropriately balance security with privacy.

The report recommends the government be required to systematically evaluate the effectiveness and lawfulness of data-mining and behavior-detection programs before implementing them, and at regular intervals thereafter.

The programs also should be subjected to robust, independent oversight, the group recommends.

A TSA spokesman said Tuesday the report "is not any kind of indictment of our program," adding that the TSA's behavior-detection officers do not claim to be adept at finding people with terrorist intent.

Instead, spokesman Christopher White said, the officers look for people exhibiting signs of stress, fear or deception, and focus on those people for further investigation.

"We are in, maybe not agreement [with the National Research Council], but we are on the same wavelength," White said.

He said the TSA employs more than 2,000 behavior-detection officers, who are stationed at all major airports across the country.

The council said terrorism is a threat to American society, but "inappropriate or disproportionate responses to the terrorist threat also pose serious dangers to society."

"History demonstrates that measures taken in the name of improving national security, especially in response to new threats or crises, have often proven to be both ineffective and offensive to the nation's values and traditions of liberty and justice," the report says.

It notes, as an example, the 1942 internment of U.S. citizens of Japanese origin after the Pearl Harbor attack.

The TSA has heralded the use of behavior-detection officers at airports nationwide. The officers look for physiological factors to indicate ill intent. The TSA says the vast majority of travelers are observed by the officers, and that the officers have detected numerous travelers with weapons, drugs and forged travel documents.

Behavioral observation techniques have "enormous potential for violating the reasonable expectations of privacy of individuals," the report says.