Lou Dobbs: Hooray for those who defeated bailout

NEW YORK (CNN) -- CNN's Lou Dobbs is no fan of the $700 billion bailout plan that went down to defeat in the U.S. House of Representatives on Monday. He spoke with Kiran Chetry of CNN's "American Morning" on Tuesday about how he thinks there are better ways to solve the financial problems plaguing the U.S. economy. 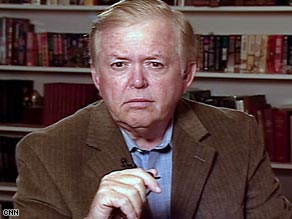 Lou Dobbs: Americans "don't want to hear this nonsense about $700 billion to bail out financial institutions."

Kiran Chetry, CNN anchor: CNN's Lou Dobbs joins us this morning from Suffolk, New Jersey. You expressed delight I guess you could say, at the fact that it did go down yesterday in defeat. We saw the largest point-drop on Wall Street ever.

Lou Dobbs, CNN host of "Lou Dobbs Tonight": Well, what happens now is that it sounds like the same fools who brought you this effort are going to try again.

Henry Paulson saying he's going to come right back, suggests he's not learning. And he's not paying attention to the Congress. These Congress people are all at home in their home districts, nearly every one of them and they're hearing an earful. The American people don't want to hear this nonsense about $700 billion to bail out financial institutions. Frankly, Kiran, they don't need it.

Economist after economist, with whom I've spoken, CEOs, they acknowledge that there are far better ways to deal with the issues confronting our financial system than this bailout. And it's absolutely obscenely irresponsible of House Speaker [Nancy] Pelosi, Treasury Secretary [Henry] Paulson, President Bush, Sen. Harry Reid, the leader of the Senate; for these people to be clucking about like hysterical -- so hysterically. It really must stop. And to hear there -- go ahead.

Chetry: I was just going to ask you --

Chetry: You say that there's other ways around this. One of the things that everyone keeps talking about is the fact that credit markets are frozen and there has to be some way to free that up so that everyday business from Wall Street to Main Street can continue.

Do you buy that?

Dobbs: No, not at all. And neither do most of the CEOs and economists with whom I'm speaking certainly. The real issue, they say, is liquidity. The Fed has injected more than half a billion dollars in liquidity into this banking system.

What we are watching are business -- quote, unquote -- leaders who won't surface and put their faces before the American public who are hysterical. Absolutely hysterical. These are not leaders of moment. They are not leaders of great character or vision. Only Warren Buffett has had the courage to step forward. And that's after he puts $5 billion into Goldman Sachs.

To watch our political leaders, they have no idea in the world, Kiran, what they're doing. Literally. And the arrogance with which this administration asks for, not only money, almost $1 trillion, and surely more in the months ahead. But the absolute power for Treasury Secretary Paulson. Give me a break. The American people want this stopped. Those Congressmen and women at home right now, in their districts, are getting an earful because this is an absurdity and it has to end.

Chetry: So in one way, you're knocking Congress. But on the other way you're saying that, I guess the system works in that the brakes were pulled. Whether or not you agree with the reasons why it didn't go through. So, weren't they doing their job and showing leadership?

Dobbs: Let me be clear, Kiran. I'm saying leadership -- I'm saying the Democratic leadership of this Congress was absolutely in the same situation as this president.

They don't know what they're talking about. They're trying to ram this thing down the people's throats and Congress. And those House Republicans and House Democrats who voted against this bailout deserve a great, great expression of thanks from the American people. Absolutely.

Dobbs: Well, the first thing we need to do is return to a traditional role of regulation. ... The problem here is not simply the housing market. ... But $700 billion and nothing in that bill deals with the foreclosure crisis, if you can imagine that. That's arrogance. That's stupidity. That is your leadership in Washington, D.C. Democratic leadership in Congress and Republican leadership in the White House.

So that's an absurdity. The first thing that has to be dealt with is mitigating the foreclosure crisis, period. Secondly, in terms of instilling confidence in the banking system and in our credit markets, the first thing to do is to deal with those institutions that are wildly out of balance, whose balance sheets, frankly, are a joke. And the regulators who should have been tending to them over the years are also a joke.

Chetry: All right. Well, they're going to take this up again today, or throughout the week as they try to figure out what the best course of action is. Maybe they should listen to you a little bit more.

Dobbs: They'll be back Thursday.

Dobbs: They'll be back Thursday to try this nonsense all over again, Kiran.