Gates sees no more troops for Afghanistan until spring

WASHINGTON (CNN) -- U.S. Defense Secretary Robert Gates said Tuesday that the earliest more forces will become available for deployment to Afghanistan will be spring or summer of 2009. 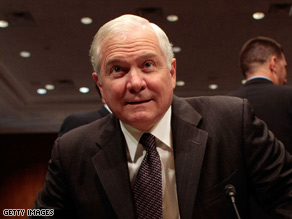 U.S. Defense Secretary Robert Gates said there should be a focus on increasing the size of the Afghan army.

Gates, speaking to the Senate Armed Services Committee, said that despite the request from commanders in Afghanistan, the military has no additional forces to send there "at this point" beyond what already has been announced.

Gates said by this spring three more combat brigades could be made available without changing current lengths of tours for troops.

And he said increasing stability in Iraq means the United States will be able to "do what it must" in both battlefields, citing a much-quoted comment from Joint Chiefs of Staff Chairman Adm. Mike Mullen.

"Last year, Adm. Mullen noted that in Afghanistan we do what we can -- while in Iraq, we do what we must," Gates said. "With the positive developments in Iraq, the strategic flexibility provided by ongoing troop reductions there, and the prospect of further reductions next year, I think it is possible in the months to come to do militarily what we must in both countries."

Last week, Gen. David McKiernan, the top U.S. commander in Afghanistan, asked for an additional three brigades, beyond the one brigade that President Bush recently announced will deploy to Afghanistan within months.

Gates on Tuesday expressed some caution about adding too many troops in Afghanistan.

But he admitted that would be difficult because of the Afghan government's limited funds and because of widespread illiteracy in the country.

The number of American troops in Afghanistan has risen from less than 21,000 two years ago to more than 31,000 today, he said, and those of allied foreign troops has increased comparably.

"We will increase U.S. troop levels in Afghanistan by deploying a Marine battalion this November and in January 2009 an Army brigade combat team -- both units that had been slated for Iraq," Gates said.

He warned against complacency on Iraq, however.

"I worry that the great progress our troops and the Iraqis have made has the potential to override a measure of caution born of uncertainty. Our military commanders do not yet believe our gains are necessarily enduring," he said. "I would also urge our leaders to keep in mind that we should expect to be involved in Iraq for years to come, although in changing and increasingly limited ways."

Gates also said the U.S. was working to address border issues to help stem insurgents who freely travel across the porous border and have attacked coalition troops in Afghanistan.

Gates said that he can see "no downside" to efforts to create a Afghan-Pakistani-U.S. patrol on the troubled Afghanistan-Pakistan border.

On Monday, Afghan Defense Minister Abdul Rahim Wardak told reporters at the Pentagon that the three countries had been discussing topics such as patrol.

"To fight them, I think we have to eventually come up with some arrangement together with our neighbor Pakistan that we should have a combined and joint task force of coalition, Afghans and Pakistanis to be able to operate on the both sides of the borders," Wardak said.

Asked about the discussions at Tuesday's hearing, Gates said that the idea had not come up when he was in Afghanistan last week.

Protection of the border area is a contentious issue. In July, Bush approved U.S. incursions in Pakistan to go after insurgents without consulting first with Islamabad. One such incursion has been known to happen.

Pakistan has expressed displeasure and asserted the right to defend its borders.

Despite that tension, Gates said that Pakistan has increased efforts on its side of the border to go after extremists. Gates insisted that Pakistan and the United States need to work together on the problem.

"Regardless of effectiveness, the mere presence and willingness to fight has reduced pressure on the Afghan side," Gates told the Armed Services Committee. "Pakistan has to be part of the strategy."

Gen. James Cartwright, vice chairman of the Joint Chiefs of Staff, who also appeared at the Senate hearing, said, "We are starting to see cooperation between the militaries we've never had."

All About Afghanistan • Robert Gates